In our country, actors are not just stars but they are literally worshipped by their fans. With 2012 coming to an end, it’s time to review which superstar reigned supreme at the ticket window and who remained comparatively dormant. This discussion / comparison also becomes more interesting as the year gone by is amongst those rare times when all the superstars arrived with full force simultaneously.

NOTE: This write up takes into account only the box office performance of superstars in 2012. 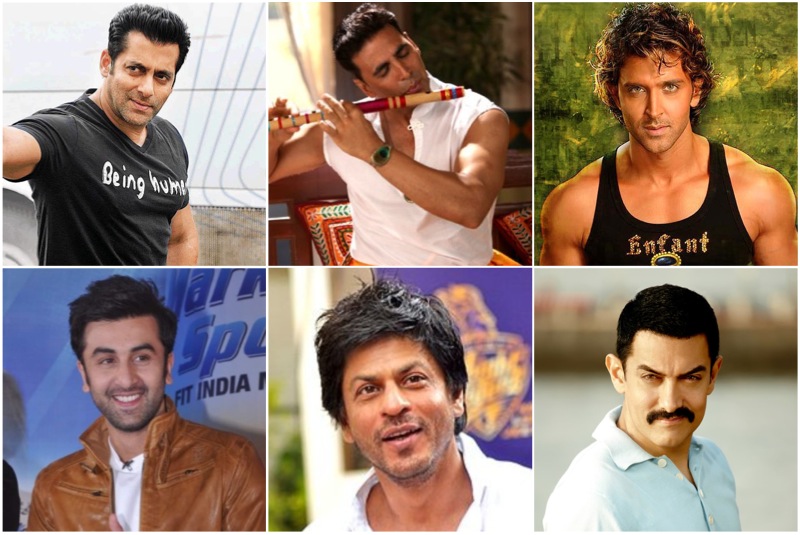 1. Salman Khan: The superhero of bollywood “SAL-Man” remains way ahead of the rest this year as well. He continued his winning streak in 2012 and completed his fifth successive blockbuster. While Tiger Khan’s Eid-Independence Day release Ek Tha Tiger (BLOCKBUSTER) arose as the Biggest Holiday Opener and went on to collect 186 cr (official figure 199 crore), Chulbul Pandey’s Dabangg 2 (BLOCKBUSTER) just before Christmas turned out to be Biggest non-holiday opener and is expected to end with Rs 150 crores. Now collections of Khan’s films are not just seen as a record but benchmark by trade pundits and his Ek Tha Tiger went closest to the 3 Idiots mammoth tally of 202cr in the recent past. Salman Khan has unquestionably reached the peak in his 23 year long career and 2012 consolidated his top position at box office a notch further.

2. Akshay Kumar: “AKSHUN Kumar” is back with a bang. Khiladi Bhaiyaa relived the splendid success of 2007 again in 2012 and became the first actor ever to have crossed the 400cr landmark within the same year. While Housefull 2 (SUPER HIT) became his ticket to the 100cr elite club by netting 113 cr, Rowdy Rathore (BLOCKBUSTER) gave Akki the biggest hit of his career. Rowdy Rathore emerged as the Biggest Non-Holiday Opener (No points for guessing, Dabangg 2 broke this record later in the year) and closed its lifetime collections at 132 cr. The remarkable OMG! Oh My God (SUPER HIT) with over 82 cr business was the cherry on the cake as it managed to win accolades with classes and hearts of the masses at the same time for Akki. The best part for Akshay Kumar was the terrific word of mouth and universal acceptance by the audience that all the above mentioned films garnered without any holiday weekends, something which has become very rare in today’s scenario of multiplex culture and big openings. Khiladi 786 (AVERAGE) couldn’t transform into a super explosive cracker at the ticket window, but it wasn’t a completely fizzle either with decent collections of Rs 63 crore. The only let down this year for Akshay was Joker (DISASTER) which was a complete washout at box office and could not even cross 22 crore.

3. Hrithik Roshan: At No.3 is the sexiest Asian man in the world. After successfully trying his hand with something as niche as Zindagi Na Milegi Dobara, Hrithik came back with a hardcore action affair, Agneepath (SUPER HIT), in 2012. Though Hrithik came very close to 100cr with ZNMD last year, it was Agneepath which marked his entry into the elite by managing over 120 cr collections. The film’s strong opening on Republic Day once again substantiated this superstar’s reach amongst the mass audience. His portrayal of the central character Vijay was applauded by one and all.

4. Ranbir Kapoor: The “ROCKSTAR Kapoor” is running a one horse race as far as competition between next gen stars is concerned and in 2012 he demonstrated this yet again. Masala films being the flavor of the season, any superstar will think twice before signing a film as niche as Barfi! (SUPER HIT). Ranbir not only did the film, he lived the central character of Barfi to perfection. He has taken a big leap at the box office since his last release Rockstar which was SEMI HIT in 2011. Barfi netted 106 cr (official figure 120 crore) at the domestic box office and made RK cross the threshold of 100 cr for the first time in his career.

5. Shahrukh Khan: 2012 will also be remembered for another special reason. Subsequent to attempts in sci-fi (Ra-One) and action thriller (Don 2), the ‘global superstar’ returned to doing what he does best, Romance. Jab Tak Hai Jaan (HIT) was a legendary combination of SRK-Yash Chopra-A R Rehman-Gulzar but Shahrukh was always the trump card. Although the film was a clear cut winner at the box office, just edging past 101cr (official figure 120 crore), its collections were adversely hit by the epic Diwali clash with Son of Sardar thereby resulting in a loss of atleast 15-20% business. Had this clash been averted, Shahrukh would have easily managed a position in the Top 3.

In this section we will evaluate the change in ranks in 2012 of top superstars as compared to 2011. Please note that this is not a parameter to judge starpower between different actors but an indication of an actor’s competition with himself in two different calendar years.

Before we begin our analysis, let us recall the Top Actor Ranks of 2011:

In the table shown above, we’ve captured ranks in 2011 and 2012 with Change in Ranks (Gain / Loss). While Akshay has shown the best performance change as he moved up 4 places from rank 6 to rank 2, Salman and Hrithik have firmly held their 1st and 3rd spots respectively, there by resulting in no change in their ranks. Contrary to Ranbir moving up by 1 rank, Shahrukh and Ajay have slipped down by 3 and 2 spots respectively. Aamir is a new entrant as he had no release last year.

Please share your comments/feedback about this article. Stay tuned to this space for other interesting reports about 2012 box office.