Ajay Devgn has been known for his acting talent, but his productions and directorials don’t always work out. ‘Raju Chacha’ and ‘U Me Aur Hum’ are the two big failures that come to mind. Now he’s back directing and starring in ‘Shivaay’, a mega-budget film on which he has invested 2 years of his life. The clash with ‘Ae Dil Hai Mushkil’ has been the mainstay of entertainment news. But at the end of the day, the two movies will work based on their content. Does ‘Shivaay’ live upto expectations? Let’s find out.

Story: Shivaay (Ajay) is an adrenaline junkie who guides tourists in the slopes of the Himalayas. He meets a Bulgarian girl called Olga (Erika Kaar) there. After a rather illogical avalanche incident, they get stuck in a translucent tent between two peaks. They make love there and Olga gets pregnant. She doesn’t want to have the baby, but damn what the woman wants, she has to bear the baby because the guy says so. The child arrives and Olga leaves for Bulgaria. Gaura (Abigail Eames), their child discovers after a few years that her mother lives in Bulgaria and after an incessant plea with her father they arrive in Bulgaria. This is where things go haywire and Shivaay has to fight goons across the streets and valleys and gullies. To know the resolution, watch the movie. 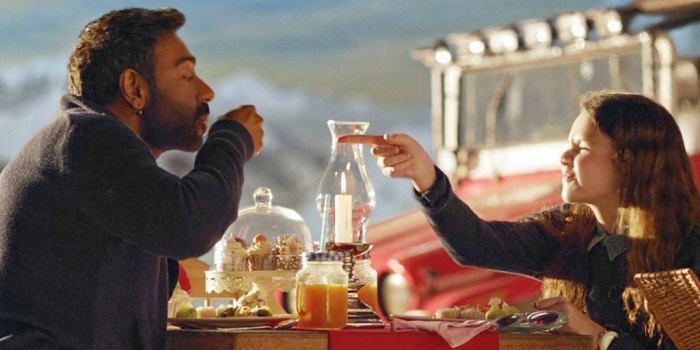 Review: The writers of Shivaay are too literal in nature, too reliant on connecting the story of Shiva with Shivaay, but it all starts feeling a bit hollow after the first few minutes which showcase the beauty of the Himalayas (alas, the mountain scenes were shot in Bulgaria). There’s not much logic in the film but that could have been overlooked if it was entertaining. It is not that Shivaay is dull, there are quite a few entertaining sequences in it. There’s a good 2 hour action drama movie hidden in the 3 hour long movie.

Shivaay is technically brilliant, the topography of the mountains have been shot well. It is reminiscent of Hollywood movies like Everest and so on. The production design is top notch (this is something that was missing in U Me Aur Hum). The editing of Shivaay is where it falters majorly. So many scenes go on and on without any end point in sight. The music of Shivaay is solid as songs like Bolo Har Har, and Darkhaast make a very good impact.

Acting: Ajay Devgn is in decent form in Shivaay both as a director and as an actor. The effort he has put into this movie clearly shows. He’s done a lot right as an actor and as a director but he also misfires a lot in both departments. Having said that, kudos to him for taking up the challenge of handling everything, the end result notwithstanding. Shivaay is the Ajay Devgn show from top to bottom. Erika Kaar doesn’t have a lot to do but she’s decent. The little girl Abigail Eames is cute. Girish Karnad and Sayessha are adept at whatever little they’ve been given to do.

Conclusion: There’s a neat little movie hiding in Shivaay somewhere and unfortunately it has been left to the viewer to discover that movie. Shivaay is not a trainwreck by any means, far from it actually. Many scenes and sequences are entertaining and engross the viewers. But it also zones out for few minutes in between those scenes. Shivaay deserves to be watched at least once for the monumental effort undertaken by a man called Ajay Devgn. He gives it his all in all departments. Watch it and form your own opinions.