Sooraj Barjatiya and Salman Khan have teamed up together thrice before and the first two times they came together, they created unparalled box office history with ‘Maine Pyaar Kiya’ and ‘Hum Aapke Hain Koun’. And they delivered the highest grosser of 1999 in the form of ‘Hum Saath Saath Hain’.

So when Barjatiya and Salman reunite after 17 long years during the superstar’s best ever phase, expectations are sure to be raised high. But the trailers have promised a typical Rajshri film which may not hold a lot of value for the youth. However, if they do manage to bring the families to the theatres, PRDP can still make history. So how is the movie? Let’s find out!

Story: Vijay Singh (Salman) is the soon to be king of Pitampur but his brother Ajay Singh (Neil Nitin Mukesh) with the help of the estate’s manager Chirag Singh (Armaan Kohli) try to kill Vijay but he somehow survives. The Raj Dewan (Anupam Kher) who loves Vijay finds his lookalike Prem Dilwale (Salman again) to fill in for Vijay for the Rajtilak ceremony. Prem is diametrically opposite that of Vijay and is playful and innocent and manages to win over everyone, even Rajkumari Maithili (Sonam) who is supposed to get married to Vijay. Prem even mends the relationship of Vijay with his sisters Chandrika and Radhika. But what happens when Vijay gets fine? What happens to Ajay and Chirag? Who does Maithili end up with? To find out, watch the movie! 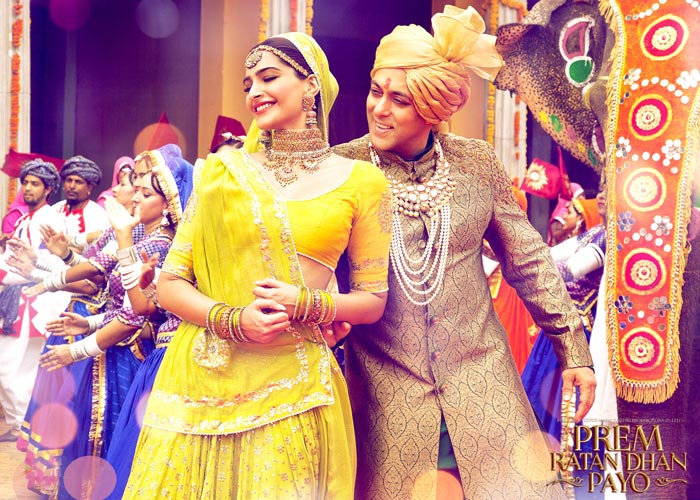 Screenplay and Direction: The first half of PRDP flows freely and the story moves along nicely whilst establishing the characters. The biggest problem with the movie is that the conflict doesn’t seem to be too big for it to matter later on when the conflict gets solved. However, we don’t mind this because Prem Dilwale’s innocent antics keep the film flowing and the audiences will like Salman’s act. The football match sequence and the sequence where Prem mends the relationship of Vijay with his step-sisters are the standout sequences. There are a fair few illogicalities too like the placement of a palace on the edge of a waterfall. At the end of the 160 minute duration, PRDP manages to make everyone smile and the emotions end up working which should in turn make the film work amongst the family audiences.

PRDP looks opulent and grand, and clearly a lot of money has been spent on the sets and the costumes. The production design is of high standards. The VFX work isn’t the best you have seen in Hindi films and the editing could have been tighter too but as we all know, Sooraj Barjatya believes in excesses.

Music: Himesh Reshammiya doesn’t deliver a chartbuster soundtrack but thankfully the placement of the songs are just about perfect and the music sounds a lot better in the movie. The songs which stay with the viewer are Jalte Diye, Halo Re, Prem Leela. And the biggest earworm of the season is the title track which seems to be everywhere. Himesh should have gotten someone like Sonu Nigam to sing the emotionally charged Bachpan Kahaan song. Also, the movie could have done with 2 fewer songs in the first half.

Acting: Salman Khan is Prem and he doesn’t put a step wrong throughout the film. He carries forward his style of acting and plays a variant of the character he has mastered by now. The innocent, bhola bhala North Indian who speaks with a smile, and he aces it yet again. Unfortunately, he isn’t too convincing as the King Vijay Singh. Sonam Kapoor was compared to Madhuri Dixit during the promotions but she doesn’t even come close to Sonali Bendre’s act in Hum Saath Saath Hain. The character of Maithili was crying out loud for a bigger star and a much better actor. Neil Nitin Mukesh does a good job as the evil brother who has a change of heart, but doesn’t have much to do in the film. Swara Bhaskar is dependably good but she doesn’t have a lot of scenes. Armaan Kohli is a major put off, his character and styling does tend to remind the audience of the horrendous ‘Jaani Dushman’. Anupam Kher is very good and portrays the Raj Dewan perfectly. Deepak Dobriyal is not allowed to fulfil his potential which we recently saw in ‘Tanu Weds Manu Returns’, but he does justice with whatever he gets.

Conclusion: Prem Ratan Dhan Payo should be judged as an independent movie and not compared with classics like ‘Maine Pyaar Kiya’ and ‘Hum Aapke Hain Koun’. The film thoroughly entertains with very few dull moments if you can immerse yourself into the world of the movie. Sure there are a few silly and illogical moments but the innocence and the ‘sanskaar’ of the plot keeps the film together. And Salman Khan puts in a stellar performance as Prem Dilwala. In the first half of the film, he wins you over time and again, with a performance that could be better than his innocent act in ‘Bajrangi Bhaijaan’

Diwali is the time when families come together and PRDP will be lapped up by families as it is a joyous movie which spreads smiles with its goodness. This festive season, give Prem Dilwala’s PRDP a try.

It’s a 3.5 star movie to be honest, but Salman’s Prem Dilwala act and the fact that we don’t get to see such films in today’s times, gets it half a star more. Sooraj Barjatya films come once in 6-7 years and there is no director in the industry who can fill a film with as much goodness, sweetness and indian tradition as much as the legendary director can.

Advice for the youth. Watch the film with your family and not your friends, as PRDP is best enjoyed with your entire family. Your granny will love it, your parents will smile throughout the film and you’ll enjoy the second half better in their company.