What can be a dream romantic Bollywood project? Just Imagine!! Okay… It has to be the iconic and trendsetter Yash Chopra directing the King of Romance Shah Rukh Khan paired opposite today’s topmost leading lady Katrina Kaif. What if the music is composed by the Oscar-winning maestro Allah Rakha Rahman with lyrics from the most gifted writer Gulzar Saab? Well… The dream has come true!!

The association of all these legends has given Yash Chopra’s last souvenir to Bollywood ‘Jab Tak Hai Jaan’, a multi-dimensional feel. Can the stage get any bigger? The obvious answer to that question will be given on November 13, when this epic saga of undying romance will hit the screens, globally. For now it’s time to check out the much anticipated music album. So without much ado, let’s press the play button on the remote. 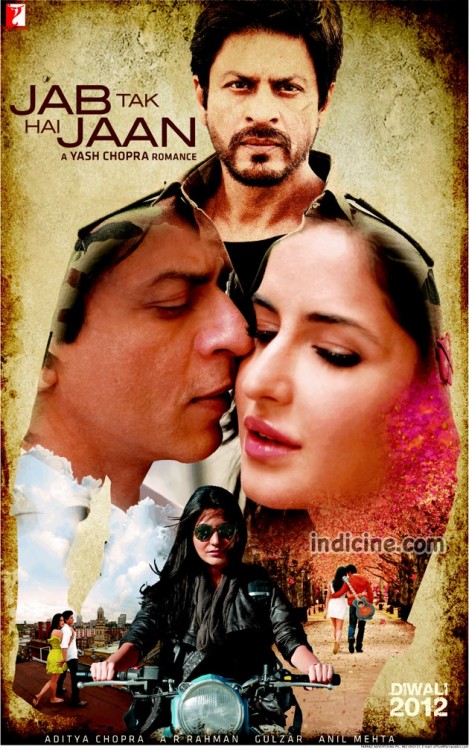 Challa: Be it DDLJ, Veer Zaara or RNBDJ, SRK-Yashraj combo has always created magic by exploring the Punjabi flavor and this time it’s no different. ‘Challa’ video is already out and it has created a lot of frenzy all around. Rabbi’s voice is refreshing as it bears uncanny resemblance to his chartbuster ‘Bulla ki Jaana’. Gulzar’s words give a Punjabi folk touch to the song. Its commendable how comfortably Rahman shuffles across different languages and still delivers sheer quality. Chartbuster! (Rating 4/5)

Saans: ‘Saans’ is a soft romantic composition driven by sensuously poetical lyrics. It’s one of the best tracks in the album. The huskier tone of Shreya Ghoshal’s voice oozes up the erotica feel of the song. Mohit Chauhan is average. (4/5)

Ishq Shava: It’s time for a zany dance number now. Rahman provides variety with the use of some interesting musical instruments. Gulzar’s lyrics are in synch with the mood of the song. Shilpa Rao’s vocals are catchy. But the real masterstroke and icing on the cake is to get Raghav Mathur (“Can’t Get Enough” fame) sing this song. The USP of the song is some killer vocals by this Canadian singer. (3.5/5)

Heer: Punjabi feel in the album returns with brilliant Sufi composition ’Heer’ sung by none other than Sufi ki Sultana Harshdeep Kaur. Kaur, fresh from the success of Jugni from Cocktail, takes this huge opportunity with her both hands and she is mesmerizing. The words by Gulzar are equally dreamy. (3.5/5)

Jiya Re: Neeti Mohan, who is a regular now in Rahman’s live shows, gets a chance to sing this groovy number. The melody is catchy, livelier and foot-tapping. Words from Gulzar glorify the feeling of a free bird. (3/5)

Jab Tak Hai Jaan: The title track of the movie is a hauntingly poetic melody by Rahman with some bewitchingly romantic lyrics penned by Gulzar. The song starts off slowly but picks up great pace as it goes on. Another Rahman regular Javed Ali strikes gold with his earthy and highly energetic vocals. He is ably assisted by talented Chennai crooner ShakthiSree Gopalan. (3.5/5)

Saans (Reprise), Ishq Dance and Poem: Saans(Reprise) a much slower and highly situational version of Saans sung again by Shreya. Ishq Dance is an instrumental piece. Jab Tak Hai Jaan poem has been seen and heard in the promo and it has been included in the music album as well in the voice of King Khan.

From the pioneers of Romance, we expected at least one romantic evergreen number which will capture the listener’s heart from the word go and stay in his mind for years like Humko Hum hi se churalo, Tujhe Dekha to ye jaana, Tu Hai meri Kiran, Dil To Pagal Hai or Tere Liye Hum bhi Jiye. That is missing.

The album, no doubt, is highly refreshing as is evident from the fact that we see irregular names like Rabbi, Raghav, Harshdeep and Neeti in a mainstream Hindi music album. Visuals will be out of the world to say the least. Songs take time to grow on you and the success of the music will be directly proportional to the film’s success at the ticket window which should not be a tough ask given SRK’s foolproof record with Yashraj Banner.

Get ready for a rocking musical Diwali!!!

Tell us your reviews of JTHJ’s music in the comments section below.