Happy New Year is the biggest release of the year so far, not just in terms of star-cast, but with 6000 screens globally (5000 screens in India, 1000 screens overseas) the Shahrukh Khan starrer is getting the widest release for a Bollywood film ever.

There are several reasons why Happy New Year is expected to take the biggest opening for a film ever. We list some of them below:

Happy New Year has almost everything going for it, right from a solo-release during the best period to release films, crores of rupees pumped into promotions (costliest marketing campaign of 2014), and starcast-wise it doesn’t get any bigger. But the fate of the film could well be decided by the script and Farah Khan’s direction. Happy New Year would be her biggest test.

The factors that could go against the film are few. The runtime is about 3 hours which is slightly on the longer side, not many have the patience to sit through a 3 hour film unless it’s hugely entertaining. Also, Happy New Year doesn’t have a chartbuster nor does it have a hugely popular love song. Manwa Laage has done well, but not close to how popular the songs from Om Shanti Om or even Tees Maar Khan were.

Trade sources say, Happy New Year has been produced and marketed at a cost of Rs 130 crore, making it the third costliest film in Bollywood after Dhoom 3 and Bang Bang. Yash Raj Films is distributing the film in India and overseas. 5000 screens including Hindi, Tamil, Telugu and 1000 screens overseas – are the figures released to the media. 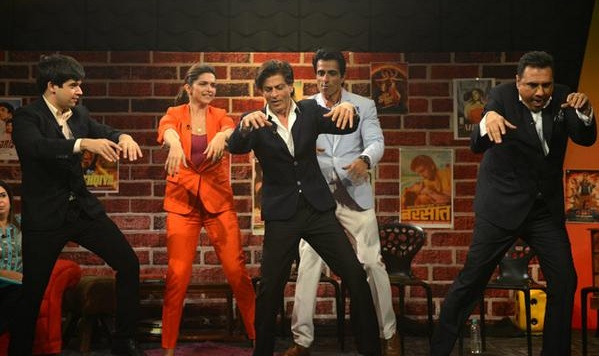 The trade expects Happy New Year to record the highest collections ever on a single day, a record currently held by Dhoom 3 (38 cr). Given the fact that a film like Singham Returns collected 32 crore on around 25% fewer screens, and Krrish 3 also managed to record the highest single day collections on the same day that Happy New Year is releases, gives the SRK starrer a good chance of collecting 40 crore on Friday. We expect the film to collect 41-42 crore on its opening day at the box office.

Due to the holidays and favourable release period, we think Happy New Year will emerge a HIT even in the worst case scenario. But box office is extremely unpredictable and the entire prediction could go for a toss if the opening day business is below expectations – that’s how important the first day business and records are in todays times, and the reason why SRK is releasing the film on Friday, a day after the Diwali celebrations.

But honestly, no trade analyst can make predictions, these are just expectations that a film carries in the trade before its releases. The response to the advance booking is good, but more than 70% of tickets are still available on sale, so just about anything can happen on Friday. Will Shahrukh’s star power ensure a record-breaking opening or will HNY fall below the opening of Dhoom 3, is something that remains to be seen.

What are your expectations from Happy New Year – HIT or FLOP? Post your predictions and comments below.