Akshay Kumar and Ashwini Yardi hit the jackpot with their previous production – Oh My God OMG. That was one well meaning film told with a good intention. So when they team up again to produce Kabir Sadanand’s Fugly, naturally the expectations would be higher. Fugly promises us a youth caper with a thriller angle in it, if we go by the trailers. Does it hold the promises? Let’s dissect.

Story: If we go by Bollywood films these days, it would seem as if Jatts have taken over the national capital. Fugly is no different. It tells the story of 4 friends played by actors Mohit Marwah, Kiara Advani, Arfi Lamba and Olympic medalist Vijender Singh. The story of Fugly seems inspired by Rang De Basanti and Shaitan (which itself was inspired by Anurag Kashyap’s Paanch). The story is told in flashback about how these four friends lead a happy exhilarating life but got caught in a political entanglement thanks to a devious cop – played by Jimmy Sheirgill. Social crusade is interspersed with a coming-of-age story about young people.

Screenplay and Direction: Now, Kabir Sadanand can’t be blamed for trying to tell a relevant story of social awakening through a fun-cum-intense tone. But it doesn’t quite work out. Fugly has its moments of innovation and imagination but it ends up falling in the age old traps of social stigma and stereotypes. Fugly moves along briskly for the better part and does a lot of things right too, but they had potential to make a cult film and they let it go. However, it wouldn’t be surprising if it connects with the inner angst in the youth of this country. 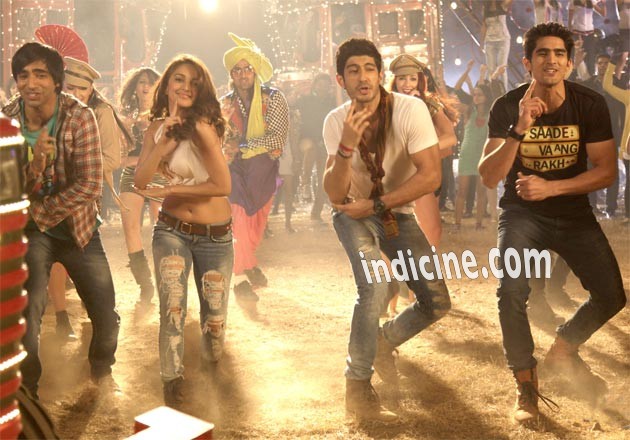 Miscellaneous and Music: The technical aspects of Fugly are aboe average and work well with the desired tone of the film. The production design and costume design are both good but they feel outlandish and out of place, at times. The editing could have been sharper. The title track of Fugly has become a hit but the other songs don’t quite stay with the viewer. And the jarring background score is one of the weakest and annoying points of the film.

Acting: If there’s a reason Fugly doesn’t work, it is because of the poor casting. The actors in the lead roles all look good but they are not too far up the rung as far as acting is concerned. Mohit Marwah and Kiara Advani both look good but their acting still leaves a lot to be desired and they appear stiff in front of the camera. Vijender and Arfi try their best but there is not much they do to make the film better. Jimmy Sheirgill seems a bit typecast in the role of a cop but is the best of the lot.

Conclusion: Fugly has been made with the right intention but the wrong execution. Kabir Sadanand wanted to tell the story of a social rising but ended up giving into age old movie traps like cliches. Still, Fugly has its moments and doesn’t bore the viewer. Akshay Kumar and Ashwini Yardi do make good producers if we go by Fugly and OMG.

Box Office: Fugly might connect with the youth of North India because of the familiar circumstances shown in the film. That is what might help it recover from the below average opening.