Zoya Akhtar burst onto the scene with her fierce and beautifully crafted ‘Luck By Chance’ (2009). Then she followed it up with a solid sophomore effort in the form of ‘Zindagi Na Milegi Dobara’ (2011), which is still one of the highest grossing Multiplex films of all time. Now, she’s back 4 years after ‘Zindagi..’ with Dil Dhadakne Do and this time she has another star-studded cast, including her brother Farhan Akhtar who has appeared in all her films. Does Dil Dhadakne Do! continue her streak?

Story: The Mehras are on a cruise trip across Europe. Kamal Mehra (Anil Kapoor) is a self made, pompous businessman whose company is on the verge of bankruptcy, Neelam Mehra (Shefali Shah) is his wife and she is used to putting up a happy face in front of everyone to maintain the sanctity of her family. Ayesha (Priyanka), their daughter, is going through a troubled marriage and wants to break out and be independent. Kabir (Ranveer), their laadla son, has been entrusted with the task of taking over their company soon. Things get awry and conventions get challenged when Kabir falls in love with a cruise dancer (Anushka) and Ayesha’s ex boyfriend Sunny Gill (Farhan) returns. The story then moves forwards with the family dynamics of the Mehras reaching a dull climax.

Dil Dhadakne Do Review: Zoya’s distinct flavour for silences and muted characters are again at the forefront here in Dil Dhadakne Do. Reema Kagti and Zoya Akhtar have basically written an upmarket version of a Barjatya or a Aditya Chopra film where the locations are not Punjab’s fields but the Mediterranean landscapes. It is mildly an entertaining film but the plot is lost when it tries to be something more profound and serious than it really should have been. Also, the moments in the first half linger on for a little too long and the second half isn’t drastically better, either. It drags reaching an unsatisfactory and hurried climatic setup. 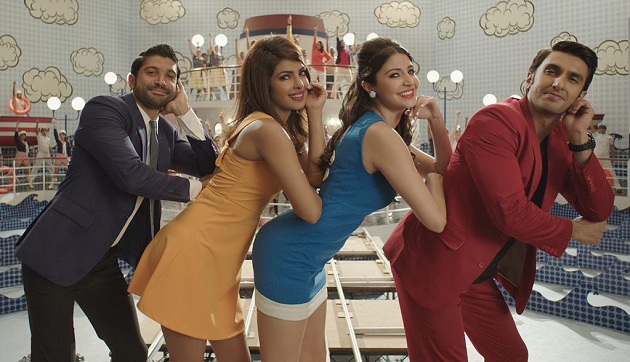 The technical aspects of Dil Dhadakne Do can’t be faulted. Most of it is sublime. The cinematography is fantastic showcasing the sunny terrain of South Europe and the cruise itself has been setup with elan, making the audience feel like they are a part of it. The production and costume design is top class and the elites in the metro cities will lap it up. The editing should have been nippier but Zoya prefers to make longish films even if they border on the boring category.

The music of Dil Dhadakne Do is average, with most of the songs being pleasant on the ears, but none standing out. Our favourites were the title track, and Pehli Baar. The song which was showcased by Anushka and Priyanka, Girls Like To Swing, didn’t work.

Acting: Dil Dhadakne Do redeems itself a bit because of the acting chops of the cast who are on fine form here. The heart and soul of Dil Dhadakne Do are Ranveer Singh and Priyanka Chopra, who play siblings. Their relationship is what the viewer will take home from the movie. Ranveer is charming, looks good and his comic timing is perfect. Priyanka charts her performance very well transforming Ayesha from a nervous dominated wife to a nervous-yet-independent woman. Anil Kapoor looks stylish and has an evil tinge in his character and plays it to the tee. Shefali Shah plays the upmarket Delhi wife flawlessly. Anushka Sharma should stop doing these sort of roles after being a part of a major Blockbuster like PK and Farhan Akhtar isn’t the most likable guy in the film even though he’s supposed to be the moral compass of Dil Dhadakne Do! The other supporting actors like Vikrant Massey, Parmeet Sethi, Zarina Wahab, Riddhima are alright in their roles. Aamir Khan is the surprise package, he is the voice of Pluto the dog!

Dil Dhadakne Do could have turned out to be a great film had it not chosen to tread the filmsy path of woman empowerment in such a loud manner when it could have done so subtly. The tone should have been hilarious throughout because we would loved to have seen Ranveer’s antics more. Finally, Dil Dhadakne Do is a boring film which doesn’t have a lot of entertainment value for the normal film going audience. But it could be enjoyed by the ones who prefer their movies to be retrospective and slow.