Daawat-e-Ishq has been billed up as a love story revolving around food according to the trailers and even with the promotional activities being centered around a food yatra. The film is produced by Yash Raj Films and stars their favourite Parineeti Chopra in the lead. Daawat-e-Ishq is also Aditya Roy Kapur’s first solo film after the mega hit Aashiqui 2. Is the film as delicious as the title?

Story: Contrary to what the trailers and promotions have you believe, Daawat-e-Ishq is NOT about food. It is about the dowry system and about how a daughter-father duo set it right in their own little way. Gulrez Gullu Qadir lives in Hyderabad and is in love with Amjad (Karan Wahi). But their marriage plans are scuppered when Amjad’s parents end up asking for dowry. Heartbroken, she devises a plan and uses her father (Anupam Kher) to carry out a plan to use the Alimony law in India to get money out of her prospective hands. To carry out this plan, both of them arrive in Lucknow and then they meet Taariq (Aditya). Are they able to get money from Taariq? Do Gulrez and Taariq eventually fall in love? Watch the film to find out more!

Habib Faisal who wrote the heartwarming Do Dooni Chaar and also the feisty Ishaqzaade is back with DEI. But he is not at his best in terms of storytelling. The film suffers from uneven pace, and the screenplay has a lot of loopholes as the plan the characters devise is unrealistic and too far from reality. The setting maybe realistic but that doesn’t hide the illogical scheming shown in the film. Saddest thing about Habib Faisal’s career is that he seems to have gotten progressively worse with his films. 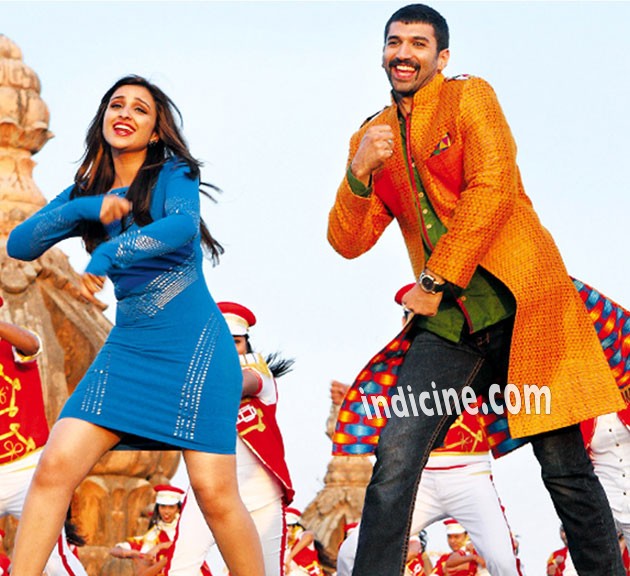 The technical aspects of Daawat-e-Ishq as is the case with all Yash Raj films are spot on. The cinematography gets the sights and sounds of both Lucknow and Hyderabad nailed. The production design is realistic and the editing is decent but could have been crisper. The music, however, doesn’t work. Most of the tracks seem to be suffering from a 90s lag as the tunes sound outdated. Sajid-Wajid could have done a much better job with the music of Daawat-e-Ishq.

Acting: Parineeti Chopra dominates the proceedings in Daawat-e-Ishq as with all of her films. She enjoys a lot more screentime than Aditya Roy Kapur. She’s spunky, and even vengeful at places. She’s at the top of her form but opting to play these bold, independent characters has made Parineeti typecast in these sort of roles. Aditya Roy Kapur is decent in his role but someone should tell him that just acquiring an accent doesn’t make anyone a better actor. Anupam Kher is delightful in his role. Karan Wahi does a good job in his role as Amjad.

Conclusion: Daawat-e-Ishq is one of the major disappointments of the year. A lot was expected from Habib Faisal’s third film but he disappoints. The film lacks any seriousness, has a non-uniform pace and suffers from a lot of loopholes. And it’s not even about food which is misleading the audience from the promos. Daawat-e-Ishq ends up being the film which could have been so much more but ends up being so little and messy and unentertaining.

Box office: Daawat-e-Ishq will take an average opening at the box office. We don’t expect the film to grow and become a hit but stranger things have happened.