The month of August has come to an end. Out of 12 odd films that released in theatres, only 4 managed to make some sort of an impact, the rest were complete washouts.

Entertainment (August 8 2014): The first big release of the month released between two major releases like Kick and Singham Returns. The result was that the majority of the audience decided to give the film a skip. The opening at multiplexes was poor, single-screens were better, but business in the first 3 days was about 30% lower than acceptable levels for a film like Entertainment. Net box office collections – 72 cr. Verdict – Average

Singham Returns (August 15 2014): Independence Day release, brand Singham, Rohit Shetty as director and Ajay Devgn playing the iconic role of Bajirao Singham, combined well to give the industry its biggest opening day of 2014. The film did well in its first weekend at the box office, but it was a free-fall Monday onwards as the film crashed at the box office. First week – 112.6 cr, Second week – 22.8 cr, Third weekend – 2.75 cr. Total – 138.15 cr. Verdict – Super Hit.

Mardaani (August 22 2014): The promos create any buzz, the music wasn’t a hit either, but Mardaani managed to take the better opening than female-centric films like Queen and Kahaani. The film won rave reviews and was declared tax free in states like Maharashtra, UP and Madhya Pradesh. But the trend wasn’t close to as good as Queen or Kahaani. The film should finish with lifetime business of 35-40 cr. Collections in 10 days: 28.2 cr. Verdict – Hit.

Raja Natwarlal (August 29 2014): The biggest disappointment of the month was its last release, Raja Natwarlal, which marked the return of Emraan Hashmi after a 14-month hiatus. The film opened poorly and dropped on Saturday, pretty much sealing its fate as one of the biggest flops of 2014. Collections in 3 days: 17.25 cr (expected to finish below 28 cr). Verdict – Flop. 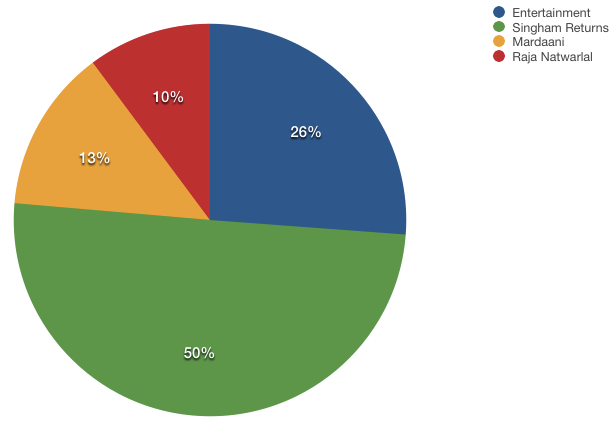 Vote for your favourite film of August 2014