Shoojit Sircar has been on a bit of a hot streak recently with his films receiving both critical and commercial acclaim. So it wasn’t a surprise when he got on stars like Deepika Padukone, Amitabh Bachchan and Irrfan Khan to sign up for his Kolkata based film titled ‘Piku’. Even though it doesn’t feel like a big film, the stakes are high. The trailer and song promos have evoked a feel good tone with some drama and humour thrown in. ‘Piku’ seems to be more in the vein of Vicky Donor than Madras Cafe. Is Shoojit able to continue his streak of giving us solid movies which quench the thirst of the audiences whilst also being profitable for the producers?

Story: Piku, as can be guessed from the title, is the story of Piku. And it revolves around her life and the people in her life – the chief players being Bhaskor Banerji (her father – Amitabh Bachchan), Rana (Irrfan) owner of a taxi rental service. Bhaskor is fixated with his bowel movements than a normal person should be and for an outsider looking at the lives of the Banerji family, can come across as irritating. Piku cares for him deeply and when a family emergency means that Bhaskor has to go to his hometown Kolkata, it is Rana who becomes embroidered in their family affairs and himself drives them to Kolkata. A health emergency puts things in perspective and we realize the value of family and aging parents through humour.

Review: Juhi Chaturvedi, who wrote the brilliant Vicky Donor has teamed up with Shoojit Sircar once again with Piku and delivers another classic film. Piku (the film), detailed to the highest degrees seen in Hindi films, is both heartwarming and heart-touching, and also extremely funny. We gaze at the lives of the Banerji family from an outsider’s perspective and we can identify with the familiar sights, sounds and can applaud the director and the writer for their applaudable script choices. Piku, should be acclaimed in the near future for evoking memories of yesteryear Hrishikesh Mukherjee films and also for its forward thinking. A Hindi film father being so open about his daughter’s sexual activity is a welcome departure from the nauseating one tone fathers we get to see in Bollywood. What makes Piku stand out is the brilliance of the moments that Shoojit captures and also for making the film fluid and never too dramatic. 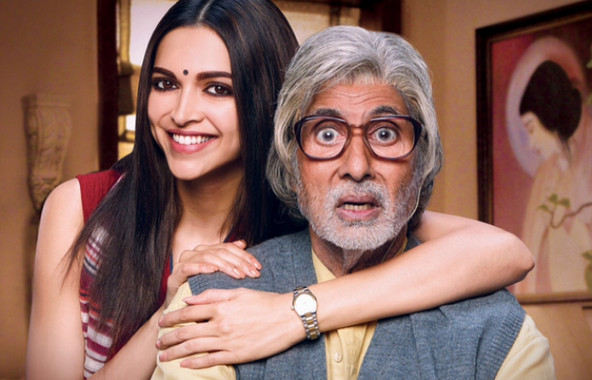 Kamaljeet Negi, the cinematographer, captures Kolkata with extreme care and sovereignty. He shows the city of Joy, in a way, perhaps, not seen till now in Hindi films. We won’t be surprised if tourism in Kolkata increases after Piku! The sets and production design are made up keeping the characters and the narrative in mind with very good detailing being evident in the CR Park house in Delhi and also the Kolkata house seen later on. The costume design is also very realistic. A job well done by the whole team.

The music of Piku has been given by the acclaimed Bengali film music composer Anupam Roy and his music makes Piku even better. The songs keep the Bengaliness of Piku intact and we wish these songs lasted longer than they did in the film. There’s a certain serenity about the sound of Piku (songs and background music).

Acting: Piku is held together by Deepika Padukone, who once again shines and takes a few more steps ahead of her contemporaries in Bollywood. She is splendid, staunch, and there’s a certain integrity in her character hardly seen in films now. Her expressions are terrific in what could be called the best performance of her career. Amitabh Bachchan, although very very good, could have toned down his Bengali diction (which was imperfect as it is) but in the end wins out hearts. He plots the trajectory of his character like only Amitabh Bachchan can. Irrfan Khan, the third wheel between the father and daughter, is astute once again. He knows his craft and delivers performances which suit the character, film after film. Therein lies his genius. And it is good to see him being cast opposite a commercial actress like Deepika Padukone. The other actors Moushumi Chatterjee, Jisshu Sengupta, and Raghuvir Yadav are all splendid. The casting of Piku is another highlight of the film.

Conclusion: Piku maybe wholly about shit and talking about shit, but the quality of the film is anything but shitty. It is enlightening, heartwarming, funny and loveable. You will fall in love with the characters and the tone of the film. Piku is so good that we can’t think of any film which matches up to Piku other than Vicky Donor. If you are a lover of good cinema, if you are a Bengali, if you love to smile during your movies, then there’s no better film than Piku for you this week. A must must watch.