Sujoy Ghosh attained a lot of acclaim with his thriller Kahaani (considered by some as the best Bollywood thriller ever). Vidya Balan and Nawazuddin Siddiqui also receive plenty of acclaim for Kahaani. Last year, Amitabh Bachchan outdid every other performance and took home the National Award for Best Actor for Piku. Now, all 4 are back in Kolkata and have teamed up for another thriller called Te3n (ala Se7en in Hollywood). Will it live up to the expectations and manage to thrill the audiences? Time to find out.

Story: John Biswas (Amitabh), not related to Bob Biswas, is an old grandfather who is still plaguing from the kidnapping of his granddaughter Angela Roy which took place about 8 years back. The presiding officer of the case Martin Das (Nawazuddin) has now given up his cop uniform for the uniform of a priest, trying to recover from the aftermath of that fateful case. Both of their interest in justice is piqued when a similar kidnapping occurs and the presiding officer Sarita (Vidya) requests the help of Martin for the new case. Will they be able to journey the dark murky waters to find the kidnappers? Watch the movie to find out, our lips are sealed. 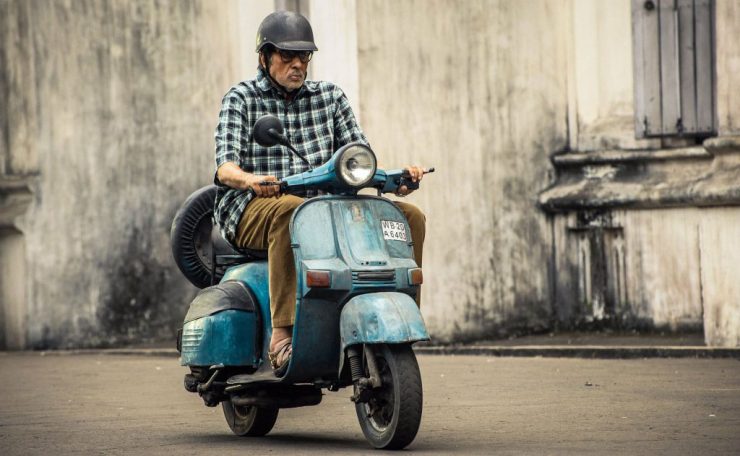 Screenplay and Direction: An official remake of the Korean film Montage, director Bibhu Dasgupta does an astute job of setting that startling story to the Kolkata milieu. The pace is slow at first to make way for world building but it seems deliberate as the pace picks up when the case reaches important junctures towards the end of the movie. The detailing of Te3n is perfect and the dialogues and conversations never seem out of place.

The strength of Te3n as a movie lies in the impeccable detailing of the setting and the characters and their homes. There’s a realism to it which is hard to achieve. The production design and the costume design should be lauded. And so should be the cinematography. The streets and bylanes of Kolkata are again captured beautifully making the city an incendiary character. The music by Clinton Cerejo is downplayed in the film but a better background score could have alleviated the movie into something else altogether.

Acting: Amitabh Bachchan is the only actor who could have played the part of John Biswas. He nails the mannerisms and characteristics of the senior citizen to the tee. The great actor is finding new footing working with these new age directors. Nawazuddin Siddiqui goes toe to toe with Bachchan and gives him able competition when it comes to acting. He is superb and lays bare the guilt of the cop-turned-priest. Vidya Balan has a guest appearance tag but she has quite a meaty role even if it is not fleshed out much. The other actors who make up the rest of the cast are fantastic, particularly Sabyasachi.

Conclusion: If you were expecting a Kahaani level of thriller, then your wishes have come true. Well, almost. Te3n is one of the best thrillers that has been made in Bollywood but the slow initial pace lets it down a tad bit. The main actors are in some of their best form and carry the film on their able shoulders. Te3n is one of best remakes/adaptations of a foreign movie and deserves to be seen by everyone with a finer taste in movies.