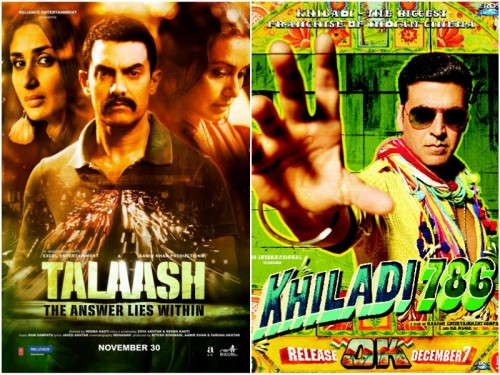 It will be a treat for moviegoers in the coming week, as two big movies are set to release back-to-back – Aamir Khan’s Talaash and Akshay Kumar’s Khiladi 786. The former a multiplex film for the so called ‘classes’, while the later is targeted mainly at the ‘masses’.

Both films will have a similar 2500 screen release, about the same as Shahrukh Khan’s Jab Tak Hai Jaan. Talaash will release on 525 screens in the overseas markets, widest ever for an Aamir Khan film.

The length of the two films is also quite similar: The runtime of Talaash is 2 hours 14 minutes, while Khiladi 786 will be 7 minutes longer at 2 hours 21 minutes. Both have been cleared by the censor board with a U/A certificate.

Which film do you plan to watch? Vote!