While we don’t usually post statements from politicians, the MCA ban on Shahrukh Khan is being discussed on various news channels and social networking websites.

Talking to the media on SRK not being allowed to watch the IPL cricket match between his team the Kolkata Knight Riders as they take on the Mumbai Indians at the Wankhede Stadium, Maharashtra Navnirman Sena chief Raj Thackeray said “Whatever happened is old. He is not a terrorist. The ban is very childish”

About a year ago on May 12th 2012, Shahrukh was involved in an ugly incident with MCA officials at the stadium soon after the match concluded.

MCA Treasurer Ravi Savant had vowed to never let SRK enter the Wankhede “He brought a few people into the field of play and when a lone security guard tried to stop him, they all around 20-25 abused him and attacked him. They also hit our security guards. Shahrukh came totally drunk and he misbehaved with the officials. We will ban Shahrukh for life from the Wankhede stadium. We are also going to file a police complaint against him”

The very next day, at a press conference which we attended at Shahrukh’s residence, the actor had said “I think they should apologize to me, for behaving the way they did. There were several people who were rushing at me, I am extremely disturbed that they should man handle children in the name of security. They have no right to touch little girls, who are not even 13 years old, physically. I think it’s completely unpardonable. Personally, if this is the kind of behaviour that is meted out to people at this stadium, I wouldn’t want to go there myself.”

In a recent interview, SRK said he would be cheering for his team from outside the stadium. 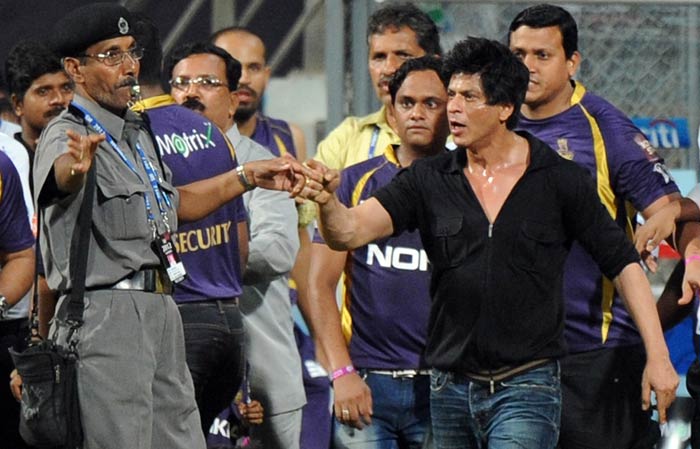