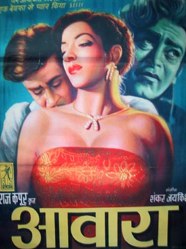 Talking to the media, while promoting his keenly-awaited release Yeh Jawaani Hai Deewana, the Kapoor scion said “I live with my mom and dad but so far my dad (Rishi Kapoor) has not told me anything about this. I even read about Awara being remade from the newspapers.”

The actor also said that he has no plans of remaking the 1951 classic “I wouldn’t like to remake Awara because you will have to get Prithviraj Kapoor, Raj Kapoor, Nargis back to this world, only then can Awara be made again”