Now this is real big!! Music album of the most awaited movie of 2014 till now is out. Even though ‘Kick’ song promos have been released hardly a month before its theatrical release, they are catching like a house on fire. With just over two weeks to go for this mega Eid release carrying tremendous buzz, the makers have finally released the full audio album. The album has multiple catchy attractions that have raised the curiosity levels of one and all. Sample a few mentioned below:

It will be an understatement to say that expectations have taken a roller coaster ride as we dwell inside this album filled with adrenaline pumping tunes. 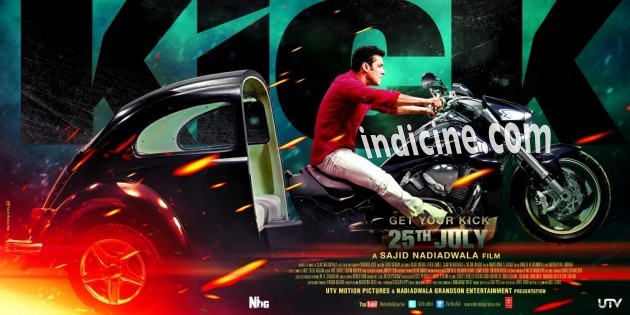 Jumme Ki Raat: Album kicks off with a song whose title reminds you of the Big B famous song ‘Jumma Chumma’ from the movie ‘Hum’. But this Himesh’s composition is completely in a different space altogether. This foot tapping number starts off with a peppy and instantly catchy tune. Mika is in his complete elements with highly energetic vocals and he is ably supported by Palak Muchhal. Since the movie is an Eid release, expect nothing less than fireworks in theatres when this song will play on the big screen. (3.5/5)

Hangover: After their stupendous success of ‘Baby Doll’, Meet Bros. Anjjan have been roped in to compose the romantic track ‘Hangover’. Salman Khan comes behind the mike for the 4th time after ‘Hello Brother’, ‘Chal Mere Bhai’ and ‘Wanted’. His voice fits into the song. Shreya is brilliant as usual. The violin music in the beginning is pleasant to the ears. Lyrics by Kumaar are average. (3/5)

Yaar Naa Miley: ‘Yo Yo Honey Singh’ is the flavor of the season and has proved his talent with hits in movies like ‘Khiladi 786’, ‘Chennai Express’, ‘Boss’, ‘Yaariyan’ etc. But this time surprisingly Punjabi pop singer Jasmine Sandlas steals the show completely. Her rustic voice is perfect for the Punjabi disco beats of the song. This foot tapping classic Punjabi number has the potential to rock the DJ Charts in the days to come. (3.5/5)

The surprise package of the album is Salman has rendered his vocals for ‘Jumme Ki Raat’ and ‘Tu Hi Tu’ as well. But after hearing the voices of Mika and Mohd Irfan, Salman’s version pales in comparison. Hangover (MBA Swag) is catchy. Then to fill in the album we have reprise, house mix and remix versions of all the above mentioned songs. Apart from ‘Yaar Naa Miley’, there is a remix version and a ‘Salman’ version of all the 3 songs.

All the 4 main songs have been shot lavishly as the grand sets are visible in the promos. The theatrical trailer became the most liked Bollywood trailer ever in flat 10 days in YouTube. This has generated enough steam for the movie and with foot tapping songs like ‘Jumme Ki Raat’ and ‘Yaar Naa Miley’ the earth-shattering opening at the box office is a foregone conclusion. Salman’s voice in ‘Hangover’ is just an icing on the cake. Songs are not musical gems but tunes are catchy and look good on screen. They go perfectly with the Salman’s dialogue – ‘Itna Mat Sochna, Dil Mein aata hoon, samajh mein nahin’

Devil is all set to run riot this Eid.