Sajid Nadiadwala makes his directorial debut with ‘Kick’ starring the man himself – Salman Khan, who returns with yet another masala entertainer to mesmerise his audience during the holy weekend of Eid-ul-fitr. Jacqueline Fernandez is cast as Salman’s love interest. Talented actors like Nawazuddin Siddique and Randeep Hooda have important roles to play.

Expectations of a film that delivers wholesome entertainment are high. Does Kick live up to those humongously high expectations? Let’s find out!

Story: Himanshu Tyagi (Randeep Hooda) meets his prospective bride Shaina (Jacqueline Fernandez) in a train and they start talking to each other. She shares her past with him, the story of her ex-boyfriend Devi Lal Singh (Salman Khan). Everything that Devi does in life, he does it for a ‘KICK’ (mental high). He was a brilliant student, a college topper, but ends up quitting several jobs. Reason? Lack of KICK! Shaina and Devi are in love and share some of the best moments in their lives. But one day, he disappears. Why? For a new Kick.

Himanshu, a police officer, is in search of Devil (Devi Lal a.k.a Devil, get the connection?), one of the smartest thief’s in town. One day, Devil, who has now lost his memory, returns back into their lives. Why did Devil leave Shaina? How did he lose his memory? Why did Devil turn into a thief? Watch Kick to find out! 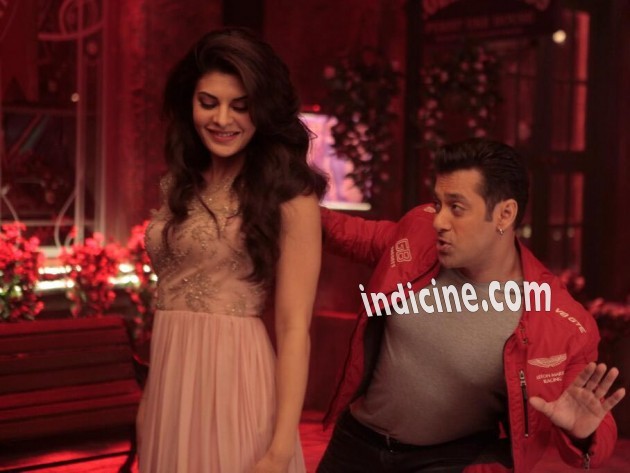 Kick Review: Sajid Nadiadwala does a decent job in his debut film as director. He retains the core storyline of the original Telugu film, adds a few crowd-pleasing dialogues, gives it a big action film feel and includes every other element that describes a typical Bollywood masala film — Romance, action (although there were fewer action scenes than we expected), comedy, punch dialogues and an item number featuring Nargis Fakhri. The film also reminds you of the ‘Dhoom’ series of films, which again is not a bad thing.

The music of the film grows on you. Himesh Reshammiya’s ‘Jumme Ki Raat Hai’, Yo Yo Honey Singh’s ‘Yaar Na Miley’ and ‘Hangover’ are the three best tracks in the film. ‘Yaar Na Miley’ looks visually stunning on the big screen. However, the placement of the songs could have been better. The editing could have been crisper. The cinematography is top notch and the production design is outstanding. Sajid Nadiadwala leaves no stone unturned in making KICK technically brilliant. Make-up, styling and costumes are all different and good. Rajat Arora’s dialogues will get extreme reactions – you will either love it or absolutely hate it.

Coming to the performances, Kick is Salman Khan’s show from start to finish. This is his version of Dhoom 4 and he charms his way through. Jacqueline Fernandez looks pretty and surprisingly doesn’t get completely out-shined by Salman’s presence. Randeep Hooda is good, but hams in a few scenes. Nawazuddin Siddiqui is outstanding. Mithun Chakraborty, Saurabh Shukla, Sanjay Mishra and the rest are all good. Nargis Fakhri looks gorgeous in a special appearance for her item song.

Overall, one of the dialogues in ‘KICK’ that has become popular is “Dil mein aata hoon… samajh mein nahi”. That dialogue pretty much sums up the entire film. If watching Salman Khan on the silver screen gives you a ‘KICK’, leave your brains back at home, take your entire family along and enjoy the 2 hour 27 minutes extravaganza called KICK!

Reasons why you should be booking your KICK tickets

Reasons why you shouldn’t be watching KICK

Did the review give you a KICK? What about the film? Post your reviews in the comments section below!