Khoobsurat is an unusual film because it brings the simplicity of a Hrishikesh Mukherjee film and combines it with the gloss and glamour of a Disney fairytale. It’s supposed to be the first Disney fable made for Indian audiences. Sonam Kapoor makes a comeback after the intrepid Bewakoofiyaan and Fawad Khan, the Pakistani superstar, makes his debut with this flick. Does it come together?

Story: As with the original, the protagonist of Khoobsurat is a character named Mili Chakraborty (Sonam). She is the physiotherapist of Kolkata Knight Riders and is called upon to look after the King of Sambhalgarh (Shekhar Rathore) after her friend is unable to take up the assignment. Here the exuberant mischievous Mili gets into trouble with the Queen Nirmala (Ratna Pathak Shah) who likes to run things her way. Mili meets the Prince Vikram (Fawad Khan) and eventually they have tiffs which slowly gives rise to love between them. But the problem is Vikram is already engaged to a Princess Kiara (Aditi Rao Hydari). Are Mili and Vikram able to overcome the problems and settle down together? To find out, watch the film. 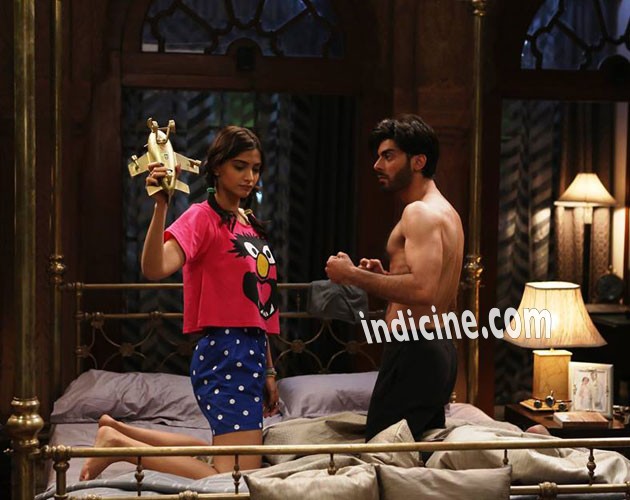 Screenplay and Direction: Director Shashanka Ghosh who made the quirky Quickgun Murugan in the past, imbibes his remake of a class with fresh characters and doesn’t follow the original to the tee. Instead he charts his film in his own way. That doesn’t always work seamlessly but you can’t blame a man for not trying. The screenplay is fun throughout the first half but loses a bit of steam in the second half. The climax is quite funny, though.

The technical aspects of Khoobsurat are work-some. The cinematography sticks out because of the lavish way in which it has been shot. Credit to Tushar Kanti Ray. The editing is also decent with none of the scenes extending their stay. The styling is also spot on with the stylists getting the royal feel right. The music of Khoobsurat has been composed by the talented Sneha Khanwalker. She has done an average job with none of the songs making a mark beyond the film’s duration.

Acting: Sonam Kapoor gets to sink her teeth into the role of Mili Chakraborty as the whole film is about her character and about her journey. Sonam has come a long way from her “Thank you” days and shows considerable acting prowess in Khoobsurat. She’s spunky, lively and yet emotionally connective as Mili. She can still get better, though. Fawad Khan is a tremendous looker as well as a fantastic actor. Ratna Pathak Shah is feisty in her role. Kirron Kher is annoying as the loud Punjabi mother of Mili.

Conclusion: If you’re in the mood for some harmless entertainment and if you don’t mind watching a Sonam Kapoor film then Khoobsurat will be a tolerable watch for you. It’s not ground-breaking or jaw-dropping cinema but it serves its purpose. Don’t expect a lot if you do decide to go watch it, and you will not be disappointed.

Box Office: Khoobsurat will find it difficult to make a lot of headway with a below average opening. The content may click with a few but all in all, it will pass under the radar.