Happy Ending is a quirky rom-com directed by Raj Nidimoru and Krishna D.K, the director-duo with films like 99, Go Goa Gone and Shor In The City to their credit. The film stars Saif Ali Khan, Ileana D’Cruz, Govinda, Ranvir Shorey and Kalki Koechlin.

Story: Yudi (Saif Ali Khan) is a writer who has penned a bestseller about 5 years ago. Currently, he is struggling to write his next, facing financial trouble and battling issues in his personal life. He wants to break up with Vishakha but can’t get rid of her. The only solution to his worries is to write a script for Govinda (Armaan) who is a superstar and wants to do a regular romantic comedy which is far from what Yudi likes to write. At about the same time, he comes across Aanchal (Ileana D’Cruz) who is enjoying the success of her best seller, which happens to be a romantic comedy. This begins a love and fun-filled journey between Yudi and Ileana who enjoy each others company and pen it down as a script!

The treatment of Happy Ending is uber-cool, fresh and devoid of the regular cliches that one would usually associate with a regular love story. The first half is funny, fast-paced and breezes through. And even though the pace drops quite considerably in the second half with the film meandering along, it has enough funny moments to keep its target audience entertained. 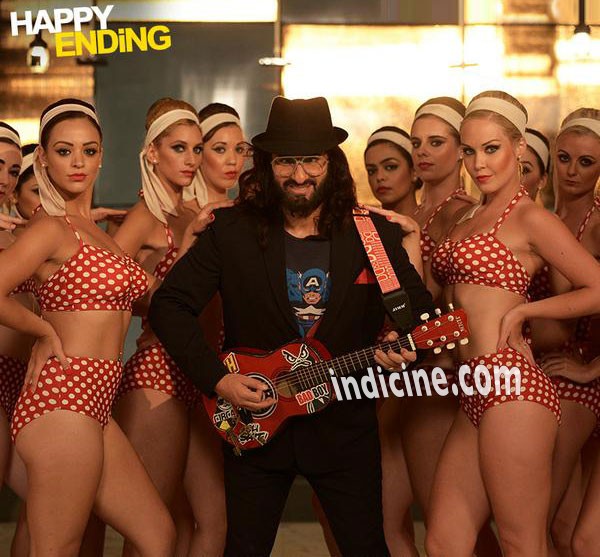 However, the problem with Happy Ending, like almost every Raj – Krishna film, is the lack of appeal towards the larger section of the audience – the families and the masses in smaller centres. The fact that quite a few dialogues are in English without subtitles (no subtitles were shown at the press screening), wouldn’t help either. Also, the film lacks dept and emotional connect with the audience. The songs fail to impress, even the choreography is strictly average. ‘G faad ke’ is the only song that stands out.

Saif Ali Khan has always impressed in rom-coms, Happy Ending is no different. He charms his way through the film. Ileana D’Cruz is good, but the chemistry that she shares with Saif doesn’t work. Not for a moment do you feel for the on-screen characters. Kalki is irritating and the pregnancy track of hers was completely unnecessary. Kareena Kapoor, Ranvir Shorey and Preity Zinta make special appearances. Preity does remind you of her ‘Salaam Namaste’ days with Saif.

Finally, the real star of Happy Ending is the legendary Govinda. He has just 6 or 7 scenes in the film and he nails each and every one of them. In an extended special appearance (it seemed like one, you’ll want to see more of Govinda!), he alone is worth the price of your ticket. His dialogues, emotions, dance and the newly acquired 6 pack abs will be loved by die-hard Govinda fans – especially those who grew up watching his films in the 90s.

Overall, Happy Ending is a good one-time watch as long as you belong to the group of audience that the film targets. It lacks the soul of Cocktail, but is far more funnier. At the box office, the film should take a slow start and then rely on word-of-mouth. The lack of universal appeal will tremendously restrict its potential at the box office.

What we liked in Happy Ending

Half a star extra for Govinda!