Now Finding Fanny which boasts of unusual quirkiness and has been made mostly in English and Konkani, getting a wide release is a step in the right direction for Bollywood films. Because this symbolizes that films made here in Indi don’t always have to be in Hindi. The Finding Fanny trailer has been generally liked by the niche audience who like English films and the presence of a strong cast has also helped increase the buzz. Deepika Padukone returns to the silver screen in a full fledged Hindi film after several months, and it remains to be seen if her glory at the box office continues.

Story: Finding Fanny is basically a road trip film. And as is the case with most road trip films, this also is based on the journey of screw-up oddball characters – 5 screw-ups in this case. It is located in a picturesque laidback Goan town called Pocolim where everything moves at a slow pace. The town’s postman Ferdie (Naseeruddin Shah) used to be in love with a girl called Stephanie Fernandes (lovingly called Fanny, of course). He wrote her a letter almost 40 odd summers ago but that love letter never got delivered. So he is coaxed by his beautiful neighbor Angie (Deepika) to go on a trip to find Fanny. To go on the trip they need a car and the town’s creepy but eccentric and extremely talented Painter Don Pedro (Pankaj Kapur) lends them his vintage car and even accompanies them on learning of the presence of Rosie (Dimple Kapadia) in the trip. Rosie is the chaperon of her daughter-in-law Angie in this trip. Now all they need is a driver and they find one in the recluse mechanic Savio (Arjun Kapoor). Finding Fanny is then all about the road trip and everything that happens during the trip.

Screenplay and Direction: The screenplay is written by the director of the film Homi Adajania and Kersi Khambatta. They manage to get the basic nuances of the Goan folk right in their script because of the perfect dialogues written for the characters. The film flows at a lackadaisical pace and it helps set the tone because with a film like Finding Fanny, this is exactly what you’d expect; not boom-boom action in every second scene. Homi let’s the characters chart their own journeys through this journey film and reveals different layers of the characters in a very natural and nuanced manner. It all comes together without a tinge of trying even though the climax does seem hurried and a bit filmy. Did they find Fanny in the film? We can’t tell you that. But does Homi find his form back again with Finding Fanny? He sure does. 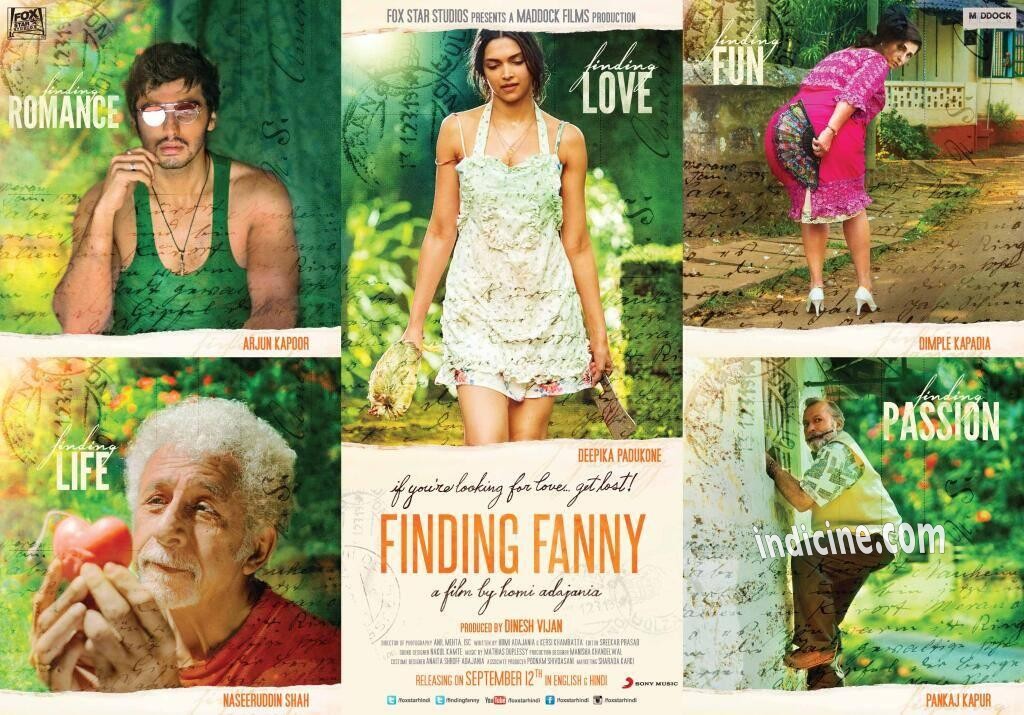 Finding Fanny is made so picturesque and beautiful to look because of the almost paintingesque production design which is further accentuated by the cinematography of Anil Mehta. Finding Fanny is one of the best films to look at with almost every scene being shot at a beautiful location. It feels as if the whole film has been put through a Photoshop filter to make it look so ethereal beautiful. The music doesn’t play much of a part in Finding Fanny except for the semi-groovy Shake Your Bootiyaan song which crops up in the end.

Acting: The film turns out to be such a glorious piece of celluloid because of the nearly perfectly cast actors. Naseeruddin Shah is at his usual best but in a more overplayed role as Ferdie and never gets a beat wrong. Pankaj Kapur is terrific as the slimey artist who is attracted to big buttocks. The way he looks at Dimple in the film will make you cringe and make your heart melt at the same time. He’s that good. Deepika Padukone delivers one of the best performances of her life, if not the absolute best. She gets her diction right and portrays the loneliness of her character and the sexual angst buried in that loneliness in a fantastic manner. You have to see her performance to believe that she is the same girl who appeared in films like Khelein Hum Jee Jaan Se and Aarakshan earlier. The two inferior performances come from Dimple Kapadia and Arjun Kapoor. Dimple overacts and hams in her role as the overbearing Rosie but is not a total disappointment. And Arjun Kapoor acts his heart out as Savio in Finding Fanny but is somehow unable to match steps with the other brilliant performances around him.

Conclusion: Finding Fanny, then is a moody comedy which can be best enjoyed by people who are used to the films of Wes Anderson. It takes its time to set up its story and doesn’t hurry up the proceedings like other films. If you get easily bored, then Finding Fanny may not be the film for you. However, it deserves to be seen because of the unusual quirky comic timing of all the characters. And if you do decide to see it, please manage to find an English screening of the film. It should be seen in English as the director meant it to be.

Box Office: Finding Fanny won’t set the box office on fire like the last films of Deepika Padukone and Arjun Kapoor. But, it will find its own audience in the high end and premium multiplexes.