Varun Dhawan has had the best start imaginable to his career with half a dozen successful films. With Dishoom, he unites with his big brother Rohit Dhawan who directs the film. Rohit teams up with his ‘Desi Boyz’ star John Abraham. The trailers have pointed to Dishoom being a buddy cop action adventure comedy. Does it live up to all the expectations? Is the film entertaining? No better time to find out than now.

Story: India’s star batsman Viraj Sharma (modelled on Virat Kohli and played by Saqib Saleem) has been kidnapped ahead of an important match against Pakistan. Indian officer Kabir Shergill (John) is put in charge to bring him back. His investigation takes him to the middle East where he has to partner up with a comic book cliche Junaid Ansari (Varun). In their travels they also meet Ishika (Jacqueline Fernandez). Things get interesting when the big baddie Wagah (Akshaye Khanna) enters the movie, and then twists and turns eventually lead us to a high octane climax.

Screenplay and Direction: Rohit Dhawan has stuck to the template of buddy cop films where one guy is serious whilst the other one is the comic relief. The cliches of a action adventure are all packed into the movie which takes place in a time frame of 36 hours. Even though there’s some semblance of logic, it would be futile for you to expect complete logic from the movie. There are leaps of faith which you have to take. Fortunately, the movie doesn’t lose grip of the audience keeping proceedings brisk. Rohit manages to balance the action with the comedy pretty well. 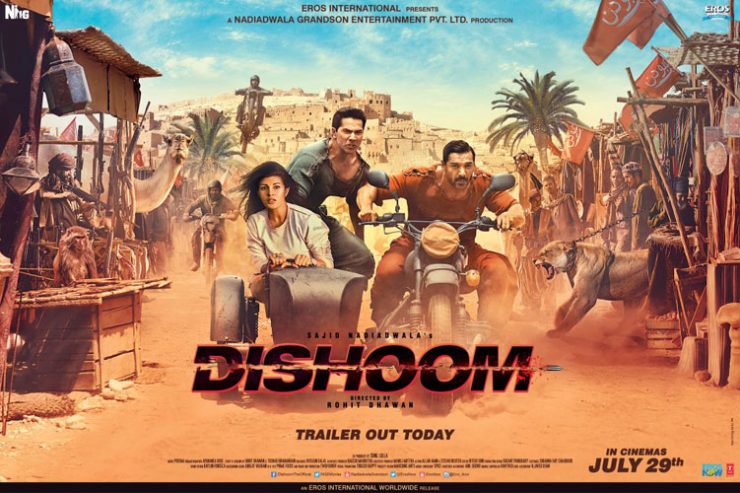 Dishoom has been shot on a relatively large scale and the action scenes accentuate that fact. The action choreography and the cinematography make the film look bigger than it really is. The production design is grand but the visual effects are rather lacklustre. The editing is slick as the movie has been kept at a reasonable length of 2 hours. The music of Dishoom is a disappointment, you expect better from Pritam, more so considering his previous album with Rohit (Desi Boyz) was such a huge soundtrack. Sau Tarah Ke is barely the saving grace.

Acting: Varun Dhawan gets ample opportunity to showcase his comic timing, and he also gets to flex his muscles during the action scenes. He is in complete form here although we wish his chemistry with John was better. John himself is in decent form. He does what he can with his limited bank of expressions but he looks mean, rough and tough. On paper, John and Varun make a better buddy cop team than they do in the movie. Akshaye Khanna is a pleasant surprise and it is nice to see him back in Bollywood after so long. He nails his part with the right amount of evil in his voice and eyes. Jacqueline is alright in her small part. Akshay Kumar is the king of cameos in Bollywood and he’s terrific in Dishoom.

Conclusion: Dishoom is an enjoyable film. If you’re familiar with buddy cop movies you will easily recognise the clichéd tropes used in the movie and overlook it. The film feels breezy and it is light because the stakes are not that high. The makers have set the movie up for possible future sequels and we can only hope that Varun and John will have better chemistry if the sequel gets made. If you are in the mood to burn some steam with humour and enjoy rollicking action then Dishoom is a good recommendation. Just don’t expect a lot from it.