There were five biggies that were expected to bring in ton loads of entertainment and also emerge as no less than blockbusters in last quarter of the year – ‘Jab Tak Hai Jaan’, ‘Son of Sardaar’, ‘Talaash’, ‘Khiladi 786’ and ‘Dabangg 2’. While JTHJ and SOS have stopped at being ‘Hits’, verdict on ‘Talaash’ is still awaited (there is a good chance that it would be a Hit eventually). However the much cherished word, ‘Superhit’, if not a ‘Blockbuster’ is still awaited. Most importantly, wait also continues for a film that is liked by most (universal hit). Well, at least amongst the target audience. 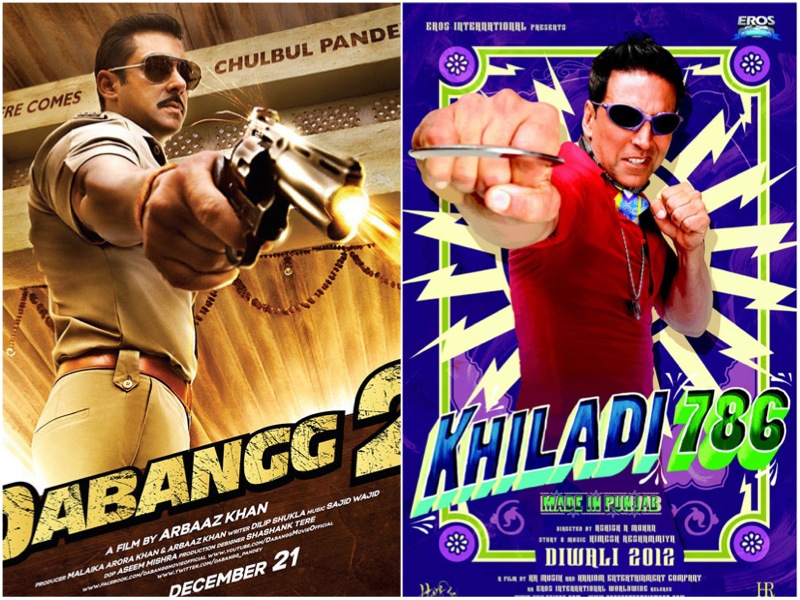 One is inclined to keep fingers crossed and expect that ‘Khiladi 786’ and ‘Dabangg 2’ turn out to be two such films.

For starters, both films are as unpretentious as they get when it comes to it’s target audience. Do we really know the storyline of any of the two films? Well, did I just use the word ‘story’? Hey, even the makers haven’t tried to throw this word at us as yet! And no, it is not because they feel that talking about the story may end up ‘revealing’ what the film is all about. However the fact remains that the Akshay Kumar starrer is being spoken about for its music and action. As for the Salman Khan starrer, it is in news for ‘attitude of Chulbul Pandey’.

The stories that would eventually play on screen could well be incidental!

However, what both films are promising is wholesome entertainment. Some may choose to scoff at ‘oh, so is this what I end up getting in the name of entertainment?’ Well, debate as some may, the fact remains that those who visit theatres in nook and corner of the country can’t be expected to sit down and critically acclaim the pointers around good v/s bad cinema. They are equally happy to munch their popcorn while watching ‘Ek Tha Tiger’, ‘Rowdy Rathore’ & ‘Agneepath’ or eating ‘samosas’ during ‘Barfi!’, ‘OMG Oh My God’ and ‘Kahaani’.

Simply put, for all the criticism that ‘Khiladi 786’ and ‘Dabangg 2’ may end up getting on their release, if they are entertaining enough for a larger segment of audience to give them a thumbs-up, they would work at the box office and (perhaps) turn out to be the quintessential superhits/blockbusters that industry has been longing for. If they are not, they would be out. Simple!

As for the critical nuances, they can wait!