Karan Malhotra made the boisterous ‘Agneepath’ remake a few years back and the movie turned out to be a hit and showed Karan’s flair for drama and action. Now, he’s back to remaking another film, this time a Hollywood sleeper hit ‘Warrior’. The original English film has quite a bit of fan following and established Tom Hardy as a star in Hollywood. How well does Karan adapt it to the Indian screens? And how are Akshay Kumar and Sidharth Malhotra in it? Will it be able to match the success of Agneepath?

Story: Garson and Maria Fernandez (Jacky Shroff and Shefali Shah) have a son named David and they lead an average life. Their life changes when Garson turns out to be a cheating abusive husband who had another child Monty from another woman. He brings Monty to live with his wife and David. Unfortunately, the life of the 4 members of the Fernandez family gets turned on its head when Garson ends up getting a prison sentence for something he did. Years pass by, kids become adults. But now the two half-brothers David and Monty are on very bad terms. David (Akshay) has a wife (Jacqueline) and a kid. Monty (Sidharth) doesn’t have a wife as alcohol seems to be his only outlet. A rich promoter decides to conduct a mixed martial arts wrestling tournament in India (Right to Fight). David’s kid has an ailment and he genuinely requires money for treatment. So he decides to participate in the tournament for this prize money. Monty on the other hand decides to take part to redeem himself and his father Garson (who seems like a changed man). The climax ends with the two brothers facing off against each other in an epic fight.

Screenplay and Direction: Karan Malhotra’s love for 90s cinema was revealed when he decided to remake Agneepath for the present times. But Brothers proves that Karan is still stuck in the 1990s when it comes to his creative decisions. The plot devises he chooses, namely a caring elder brother, an abusive father who goes to jail, the destructive younger brother, the sick child, the misplaced item number, are all stuck in the distant past. Unfortunately in his attempt to adapt Warrior for Indian sentiments he has ended up making an outdated, melodramatic and nauseatingly boring version of the film. Brothers flows along at the pace of a sloth in the first half with flashbacks galore. The second half is an improvement but the violence and background score is too jarring for the viewer to truly feel any empathy for any of the characters. Karan has made 2 remakes now and both times he has opted for the overdramatic and over-violent route. 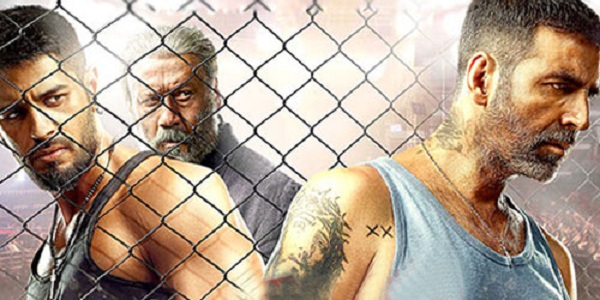 The technical aspects of Brothers is probably the best thing about the film. The production design is top notch and modern, which is a bit ironic since the screenplay is so outdated. The action choreography is slick but it would have been nice to see more technical fighting than the brutal fighting they portrayed. The costume design is stereotypical and gives the catholic characters biblical verse tattoos, and crosses to establish their religion and background. The music is another huge disappointment in Brothers. The Sonu Nigam song seems like an apification of Agneepath’s Abhi Mujh Mein Kahin. The item song Mary is neither groovy nor high on memorability. The background score is too loud and jarring for a movie with a subtle story.

Acting: The major saving grace of Brothers is Akshay Kumar. He salvages the film to a degree and makes it a lot more tolerable than it had any right to be. He is in fine form and his look-change has certainly helped his performance. He gives a moving, gut wrenching performance as David. And he fights like a pro too! Sidharth Malhotra is decent and does well not to overact even if it means veering into the Ek Villain zone. Jacqueline is below par and her incompetence is gazing even though she tries her level best throughout the movie. Jackie Shroff is good as the alcoholic, regretful father. Shefali Shah does well. Ashutosh Rana is very good. Kulbhushan Kharbanda and Kiran Kumar are a welcome addition to the cast.

Conclusion: Brothers is an outdated, boring, overtly emotional and overtly violent movie. The drama should have been brought down 4-5 levels and it would have made for a fascinating case study of characters but the director’s inability to show us the psyche of the main characters is unfortunate. Akshay Kumar gives one of his best performances ever and the action scenes are well choreographed (if you ignore the brutality). If you are a fan of dramatic 1990s cinema and brutal action scenes don’t bother you, then give it a watch. But if your definition of cinema is fast paced, joyful movies then give it a miss.