Karan Anshuman has been a reputable film critic for a few years now, someone who is known for his immense knowledge of movies. So when he decides to write a script and direct it, expectations are raised. And when the movie is a satire based on religion and is produced by Farhan Akhtar and Ritesh Sidhwani, expectations rise even further. Popular film critics like Khalid Mohamed have failed to make it big as directors. Does Karan succeed? Is Bangistan worth a watch? Let’s find out.

Story: Bangistan is set in an Island nation located in the Indian ocean. Here, the Northern part is dominated by Muslims and the Southern part by Hindus. There is polarization in the people because of religion even though the religious leaders of both religions are on friendly terms with each other. The extremists want to malign the other religion and hence recruit two people from their own religions Hafiz Bin Ali and Praveen Chaturvedi (Ritiesh and Pulkit) to pose as members of the opposite religion and to carry out a terrorist attack at a world religious conference in Krakow, Poland. In Krakow, both Praveen and Hafiz become roommates and various incidents occur which lead us to the dramatic climax.

Screenplay and Direction: The biggest problem with Bangistan is the idea of the film, which promises a lot but the resulting piece of cinema is utterly disappointing. It is a funny film which hardly has any laugh-out-loud moments and even the satire seems dumbed down for the normal audience. Karan could have done so much with Bangistan but the film eventually becomes mangled in its own aspirations of being both funny and dramatic. The preachy climax doesn’t help either. Bangistan starts off well but loses its pace very quickly and it has hardly any role for women which reeks of regression. Jacqueline’s character seems like a glamorous afterthought. 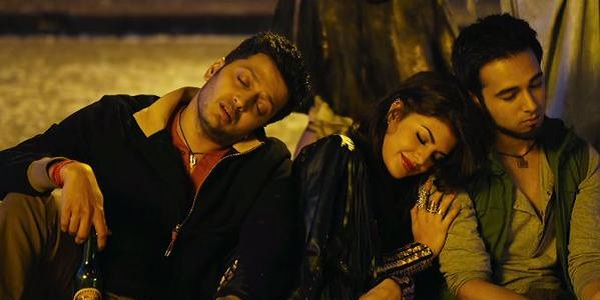 The best thing about Bangistan is its cinematography which is breathtaking. Polish cinematographer Szymon Lenkowski has shot the film with utmost care and symmetry almost bringing an auteur like care to his frames. Many of the frames reminds you of Wes Anderson’s movies. The costume design and set design is also very detailed (we wish the director had paid the same care to the story!). The editing is also very good since the length is kept to a meagre 2 hours. The music is nothing to write home about, with the background score being appropriate for the scenes.

Acting: Ritiesh Deshmukh puts in an honest performance even if the role doesn’t have too many dimensions to it. He is earnest and tries his best. Pulkit Samrat also gives it his best but unfortunately his competence is remarkably low. He just can’t act effortlessly. Chandan Roy Sanyal is however, very good and he should have probably been given Samrat’s role. Jacqueline doesn’t have a lot to do but she does her best to look good and entice the two male leads. Kumud Mishra is one dimensional but his performance is funny.

Conclusion: Bangistan is a missed opportunity. They could have gone into any direction with the premise but they chose the worst possible direction by making it preachy instead of funny. And the comedy in Bangistan is either too high brow or dumbed down. There doesn’t seem to be a middle ground. It is plagued by bad acting (Pulkit Samrat) and a slow screenplay. The camera work is extraordinary and the sets are detailed, which also happens to be the best thing about the film. In short, not worth a trip to the theatre.