Anushka Sharma, who has received severe criticism on social media for her enhanced lips, denies going under the knife for the new fuller-lip look. In an official statement, the actress attributes her ‘new look’ to a temporary lip enhancing tool which was used for her upcoming film ‘Bombay Velvet’. 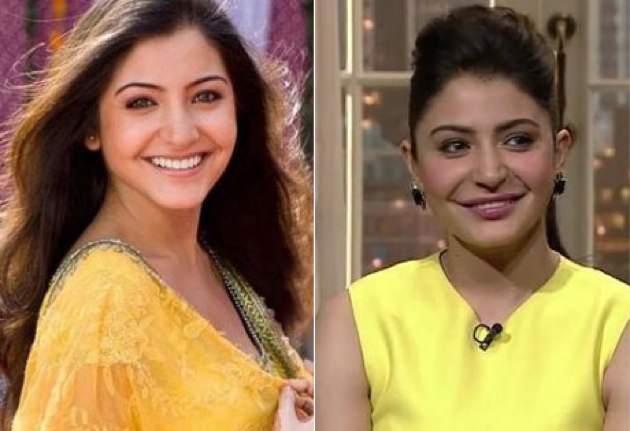 Anushka Sharma Lip Job – Before and After

As a person I find it difficult to talk about my personal life and hence have always maintained a low profile choosing to interact with you all on twitter with my random -mostly illogical thoughts seeming like the only thing I feel ok about ..that’s just who I am .. But in today’s time where PR stories and feeding people with information constantly or making appearances is a fad somewhere people like me get lost in translation or in this case translations !

Lately there has been a LOT of talk about me in this particular episode of KOffee with Karan . Mainly regarding my lips . I am here to just convey what I have to say regarding the same . I am talking about it only because this story has taken a scary direction and things have been ‘blown out of proportion’ ( pun intended ;) ) …

For a short while now I have been using a temporary lip enhancing tool and that along with make up techniques ( I have learnt over the years) is the reason why there might be a change in the appearance of my lips. Having stated this fact let me very vehemently assure everyone that I have by no means gone ‘under the knife ‘ or done any kind of ‘plastic surgery’ or undergone any intrusive procedure . This was my decision and was done for the sake of my look in my upcoming film Bombay velvet,a period drama where I play a jazz singer in the 1960’s – 70’s . And it was taken from the referencing of that time .

The drastic change in my appearance on KWK is due to lot of factors put together and not just my lips . Everyone goes through good and bad days. Did I think I looked good on the KWK episode ? NO . I do feel I could have done things differently .
To put the current conjectures and reportage straight once and for all from my end – I have said this before and am saying it again .. I do not believe in plastic surgery or any other means of unnatural permanent changes to the body . I do not support it or stand for it or recommend it.

Now if someday my legs appear different and sexy to you ! Please don’t say I’ve done ‘Something’ …

Oh ! And also … Some of the ‘joker’ jokes/memes doing the rounds though a bit mean did bring a smile to my lips ;)

Goodnight to all
Love and Light
Anushka

The actress gets support from her contemporaries Sonam Kapoor and Alia Bhatt.

Sonam tweeted: “Kudos to Anushka Sharma for addressing unfair criticism head on… have always admired her as an actor and now I definitely admire her as a person.”

Alia Bhatt tweeted  “Way to go Anushka Sharma. People are dealing with a strong girl here so say what you want… nothing is bringing her down.”

Karan Johar also came out in support of Anushka.. he tweeted “Anushka Sharma is a powerhouse of talent and the downside of social media cannot and will not take away the core of her creative existence”