With a special appearance in ‘The Shaukeens’, Akshay Kumar completed a fairly successful year. He began 2014 with A.R Murugadoss’ ‘Holiday: A Solider Is Never Off Duty’ which did very well at the box office and followed it up with an average grosser ‘Entertainment’. 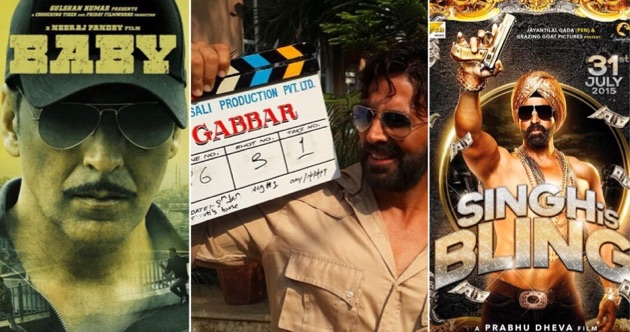 Moving on to 2015, the superstar has plenty of promising films lined up for release. Different genres, leading banners,

critically acclaimed as well as directors with tremendous mass-appeal — 2015 could well be a blockbuster year for the eternal Khiladi of Bollywood.

Full list of Akshay Kumar’s Upcoming Movies in 2015 below.

Baby (January 23 2015): He begins the year with the much-awaited ‘Baby’, directed by Neeraj Pandey who has films like ‘A Wednesday’ and ‘Special 26’ to his credit. The film, also starring Taapsee Pannu, Rana Daggubati and Anupam Kher may not take a huge opening at the box office, but it promises to be a classic. Read the synopsis:

The country is perpetually under threat from terrorist powers and the common man walks unaware of the threats and the attacks that our Government controls and prevents. While the common Indian fights for everyday issues, there are deeper and bigger threats to him and his family that he will never know exist because it is the men and women in uniform that safeguard them. The men and women who put country before self, the men and women who define our history because they give a damn!

Ajay (played by Akshay Kumar) is one such officer who is part of an elite team chosen from amongst the best in the Forces to form a covert Counter Intelligence Unit. In the course of foiling one terrorist attack bid, Ajay discovers a major threat to our nation – a plan to cause damage and strike fear at the heart of our very existence. The plot is masterminded by a maniacal leader whose organization has its tentacles spread across the world. As days progress, the unit goes through escalating challenges with time ticking against them and risks escalating. At all points, the members of the unit give it all they’ve got and stand tall to guard us with all their strength so that we may sleep safe in our homes. Covert and courageous operations are performed across Kathmandu, Istanbul, Abu Dhabi, Delhi and Mumbai as our protectors will not rest till evil is debated.

Will the maniacal Maulana Rehman and his band of evil succeed in striking terror in the heart of India? Will the Indian Government change gears from being reactive to proactive and strike? Will Ajay and his unit be able to prevent this terror tsunami?

Gabbar (April 3 2015): Scheduled to hit screens about 2 months after Baby is Gabbar – a remake of A.R. Murugadoss’ Tamil film Ramanaa. Produced by Sanjay Leela Bhansali and Viacom 18, Gabbar is an action masala entertainer directed by Krish. The release date hasn’t yet been official confirmed, but the film could release on a different date as Kabir Khan’s Phantom is also scheduled to release on the same day. Shruthi Hassan plays the female lead. Plot details:

Gabbar Singh Rajput (Akshay Kumar) creates his own vigilante military network called the Anti-Corruption Force (ACF) that eliminates the most corrupt individuals, from all walks of life, in a systematic manner. As pressure builds on Police and Government to track down the man who masterminds these killings, Balbir Singh (Sonu Sood) is specially summoned to head the task. He is aided by Suryam (Prakash Raj) who, though being just a constable in the mammoth Police force, is compelled by his instincts to see through the underlying design.

Brothers (July 31 2015): Producer Karan Johar officially announced earlier today that the shooting schedule is moving at a faster pace than expected, which is something that you hear quite often when it comes to films starring Akshay Kumar. When most other actors struggle to release one film a year, he somehow manages to complete 4 films a year and still has enough time left for vacation! Brothers will now release on July 31st i.e two weeks after Salman Khan’s Bajrangi Bhaijaan and two weeks before Shahrukh Khan’s Fan – which makes it 3 massive films in a month! Directed by Karan Malhotra of ‘Agneepath’ fame, Brothers also stars Sidharth Malhotra, Jacqueline Fernandez and Jackie Shroff. The film is an official remake of Hollywood film ‘Warrior’. Plot of the Hollywood film (could be different from the Bollywood remake):

Two brothers face the fight of a lifetime – and the wreckage of their broken family – within the brutal, high-stakes world of Mixed Martial Arts (MMA) fighting in Lionsgate’s action/drama, WARRIOR. An ex-Marine haunted by a tragic past, Tommy Riordan returns to his hometown of Pittsburgh and enlists his father, a recovered alcoholic and his former coach, to train him for an MMA tournament awarding the biggest purse in the history of the sport. As Tommy blazes a violent path towards the title prize, his brother, Brendan, a former MMA fighter unable to make ends meet as a public school teacher, returns to the amateur ring to provide for his family. Even though years have passed, recriminations and past betrayals keep Brendan bitterly estranged from both Tommy and his father. But when Brendan’s unlikely rise as an underdog sets him on a collision course with Tommy, the two brothers must finally confront the forces that tore them apart, all the while waging the most intense, winner-takes-all battle of their lives.

Singh Is Bling (October 2 2015): If Singh Is Bling manages to get a solo release, it could well turn out to be a perfect date. Unlike this year, Diwali begins only in the month of November, during which Salman’s Prem Ratan Dhan Payo is schedule to hit screens. Dharma’s Brothers was initially announced for this date, but it was announced today that the dates have been swapped. Singh Is Bling also stars Kriti Sanon and Rajpal Yadav. The film is directed by Prabhu Deva who has a 100% record as director in the Hindi film industry. Not much is known about the plot, but the film is expected to be a typical Prabhu Deva entertainer – with plenty of punch dialogues, action, songs and romance.

Four big releases for Akshay Kumar in 2015, and all films look promising on paper. The gap between each of his releases is 2-4 months, something that we have come to expect from Akshay. The combined costs of all the 4 films is expected to be somewhere around 225 – 250 crore, which is a lot of money.

He will also be shooting for films like Airlift, Rowdy Rathore 2 and Housefull 3 next year, but none of those films are expected to release in 2015.

Which Akshay Kumar film in 2015 are you looking forward to? Vote!