Karan Johar is inarguably the biggest brand when it comes to directors in India. He is more well recognized and more famous than many leading actors. He and Aditya Chopra are responsible for setting the tone of Bollywood in the late 90s and 2000s. So when he makes a movie after 4 years, fireworks are to be expected. Ranbir, Anushka and Aishwarya make for a fascinating trio of actors and couple that with the blockbuster music, Ae Dil Hai Mushkil is one hot film. Does it live up to the hype?

Story: Ayan (Ranbir) is a famous globetrotting musician who falls in love with Alizeh (Anushka) after their first meeting. But Alizeh keeps spurning his advances by friendzoning him. That doesn’t stop Ayan from giving his feelings away. All of his requests for a love affair are spurned. Things get interesting when the character of hot poetess and older married woman Saba (Aishwarya) enters the life of Ayan. This love triangle culminates in a climax which has a touch of morose drama about it. Does Ayan get Alizeh? What happens to Saba? Find out more in theatres near you.

Ae Dil Hai Mushkil feels like a Bollywood romantic drama movie, if we have ever had one in recent years. Karan Johar does well to highlight the moments of bonding and friendship between his two young leads and then uses the lightness of those moments to trap the viewer into feeling for the characters. He is skilled at extracting emotions from every line of dialogue and Ae Dil Hai Mushkil is no exception. The gripe that people can have with the movie, however, are the decisions taken by the characters, which border on stupidity. Still, Ae Dil Hai Mushkil is an entertaining movie which keeps things interesting till the climax. 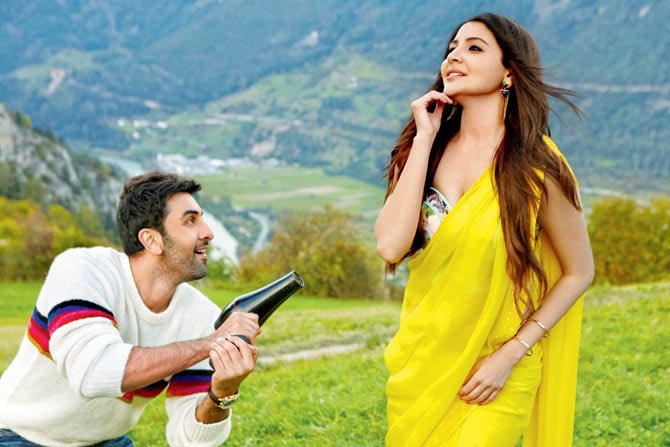 The music of Ae Dil Hai Mushkil is one of the highlights of the movie. All the songs vie for attention and most of them suit the tone and context of the movie perfectly. The title track is melancholic and enlists a sad charm about it. Bulleya has a rock vibe to it. Channa Mereya is probably the pick of the soundtrack as it encapsulates heartbreak in its lyrics. The breakup song, Alizeh and Cutiepie all contribute towards making ADHM sound beautiful.

Acting: Ranbir Kapoor is a bonefide star and his last few flops can’t change that about him. He is tremendous as Ayan. He portrays the initial goofiness of Ayan and the tragedy of the latter Ayan brilliantly. Anushka Sharma provides him able company and even outshines him in a few scenes. She seems like a natural at this role and it’s a movie which could go on her showreel. Aishwarya is enchanting as Saba and it filled us with happiness seeing her back in a charismatic and stylish role like this one. Fawad Khan, whose presence gave the film a lot of publicity, shows his acting class in Ae Dil Hai Mushkil. There are quite a few special appearances in the film, which the audience will love.

Conclusion: Ae Dil Hai Mushkil takes us back to the forlorn era of movie making where movies tended to rely on the drama of events and the punch of dialogues. It is not without its faults by any means. The characters are borderline frustrating and the second half is very heavy on the heart. Inspite of all that, Ae Dil Hai Mushkil flows fluidly and entertains all the way through. The music doesn’t provide a hindrance and the acting elevates the drama. Any and every lover of Indian classical movies should check out this classical tale of romance in a modern garb called Ae Dil Hai Mushkil.