Aamir Khan is reportedly upset that Pakistani websites have carried his ‘FAKE’ interview, where he speaks about the ‘Hindu’ and ‘Muslim’ religions.

In a statement to the media, Anand Desai, managing partner of DSK Legal said “Mr Aamir Khan was shocked to find an interview attributed to him on several Pakistani websites in relation to his latest film PK. He has never given such an interview. It is clearly a fabrication by someone trying to impersonate him, done with the intent of drawing visitors to their website, and is defamatory to our client”

“Today we sent legal notices on behalf of Mr Khan to the websites. The impersonation is a very serious infringement of our client’s rights, and we will take legal recourse. Mr Khan will be filing a criminal complaint with the Cybercrime Cell, Mumbai Police after he returns to Mumbai” he added.

Below is the full ‘fake’ interview that was reportedly carried on several websites. 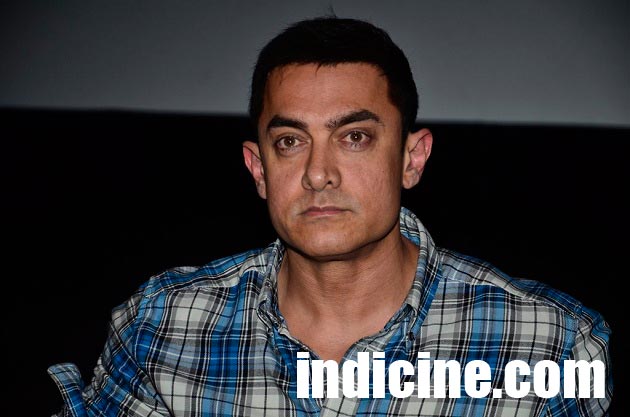 Unknown Reporter: You stole money from a Hindu Temple, but not a ‘chadar’ from mosque/tomb?
Aamir Khan (Fake): It is the money that people need to survive in this world, not the ‘chadar.’

Unknown Reporter: In a scene in the film, Lord Shiva was degraded. Why not the Prophet or Hussain of Islam?
Aamir Khan (Fake): First of all, none of the Lord(s) were degraded. Secondly Muslims don’t use any picture or figure of their Prophet or Hussain (A.S). Therefore, you cannot impersonate them in any way.

Unknown Reporter: Posters of missing Lords and Ladies of Hinduism were displayed in the film. Why not the God of Muslims?
Aamir Khan (Fake): I would reply to this question with the same answer. You cannot raise the question on Allah or His personality since Islam doesn’t show or use any picture of Him.

Unknown Reporter: The guy in the film was a Muslim while the girl was Hindu. The film ended up showing that Muslim or Pakistani men are not a fraud but loyal. Don’t you think that love story was a part of Jihad.
Aamir Khan (Fake): Well, no. The ending of the film had a message that Muslims and Pakistanis are not who we think they are. They are loyal and dutiful instead. Previously, we have seen a Hindu boy and a Muslim girl in many movies, neither we protested against it nor you did. I guess you shouldn’t protest now either.

Unknown Reporter: We saw you chasing and targeting a Hindu Saint throughout the movie. Why not a Muslim cleric?
Aamir Khan (Fake): None of the clerics in any Islamic society calls himself a messenger of God, or someone who can contact his God. Every cleric, no matter how senior he is, learns from the book of Allah, The Holy Quran, and preaches from it.