Anushka Sharma made quite a debut as a producer with NH10, which not only earned her accolades but also made enough money to give her name as a producer of some credibility. Now she’s back with the quirky looking Phillauri, which is again another high concept based movie. The promos have promised a funny film but also highlight a dramatic angle. Does the movie entertain like a Hindi film is meant to? And does Anushka Sharma shine again?

Story: Kanan (Suraj) is in his mid 20s and he’s being coaxed into marrying his childhood sweetheart Anu (Mehreen Pirzada). But he’s manglik and has to marry a tree, which he does. Only later does he realise that he’s not only married the tree but also the ghost who used to reside in the tree. Enter Shashi (Anushka), the friendly ghost. Kanan and Shashi have playful exchanges at first but things get interesting when the story keeps going back and forth in time. We get to know about Shashi’s erstwhile life, when she loved an Awara poet of her village called Phillauri (Diljit). But she’s a heartbroken ghost because the poet Phillauri left her. The rest of the movie is about a series of events culminating in the audience getting to know the true reasons for Phillauri’s act.

Screenplay and Direction: It would be the easiest thing to brush off Phillauri as frivolous, but director Anshai Lal has filled his screenplay with all the usual Hindi film trappings in the high concept space that he is operating out of. The story sounds ridiculous on paper, but when it comes alive on screen it shines. There’s enough entertainment in Phillauri to keep the audience hooked throughout the length of the duration. What is even more interesting is that Anshai makes quite a few important sweeping statements about our country and our women and some of our rituals. He takes his time to tell his story and to layout the background of the characters but once he gets going, he doesn’t stop. But the pace does drop off in the second half and the fun of the first half also goes missing to an extent after the interval. 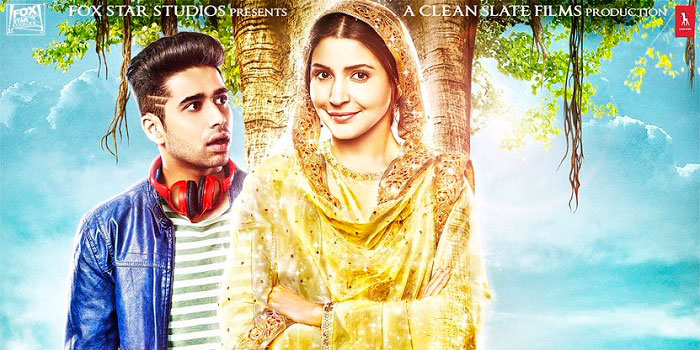 Phillauri looks like a deft movie because it has been shot so well. The camerawork is absolutely top notch with very carefully crafted frames and scenes. The production design makes the film look a lot bigger in scale than it normally would have been. The visual effects are stunning as the CGI ghost character doesn’t tow the stereotypical line of a Bollywood bhoot, they almost reinvent the Bollywood bhoot. The editing could have been tighter because the film didn’t need to be almost 2.5 hours long. The music of Phillauri suits the nature, even though none of the songs have become Bonafide chartbusters. The songs in the movie, work.

Acting: Anushka Sharma is in fine-fine form as Shashi, the friendly ghost. She’s endearing as the bhoot and beautifully graceful as the lover scorned by a moron poet/lover. She shows her genuine ability to make you care for the character. She makes Phillauri, the movie. Diljit Dosanjh does well too. He looks the part, but his acting does come across as too laidback in a few scenes. You know Anushka cares for this man, but you don’t realise why she loves this man so much. Diljit doesn’t do justice in that aspect. Suraj Sharma is the perennially confused 21st century kid, and he portrays that well. As a Bollywood debut, Phillauri is as non-conventional as it could get. Props to the producers for choosing Suraj for this role. Mehreen Pirzada looks ethereal, is charming and does justice to her part.

Conclusion: Phillauri is Bollywood’s take on a supernatural comedy and kick starts the annual woman oriented film festival (Naam Shabana, Begum Jaan, Noor to follow). It is a different movie which won’t appeal to all sections of the audience but it is a cute movie with a story of heartbreak and longing at its core. Anushka Sharma gives this little film a heart and she’s endearing. If you love her, then you must not miss Phillauri. Even if you are not in love with Anushka, Phillauri will still entertain you provided you’re open and receptive to all genres of movies.