Akshay Kumar has become the ideal star to get films made within a budget and recover the budget. He’s also been a part of some well reviewed films recently like Special 26 and Baby and some commercial hits like Holiday and Gabbar is Back. This time he’s back in Airlift with a film that is one of his most anticipated movies recently in terms of storyline. It deals with very sensitive subject? Will director Raja Krishna Menon be able to do justice to the subject? Let’s fine out.

Story: Ranjit Katyal (Akshay) considers himself to be Kuwaiti and loves the extravagant lifestyle of the middle East nation. Ranjit lives with his wife Amrita (Nimrat), who seems to be primarily busy with their kid. But things quickly turn sour when one night in August 1990, the Iraqi army suddenly marches onto the streets and invade Kuwait. By a twist of fate, the lives of 170,000 Indians living in Kuwait takes a turn for the worst. Ranjit suddenly grows a conscience and becomes patriotic. He takes up the mission of helping all the Indians to get out of Kuwait safely and securely. Most of the proceedings in the second half are about the impediments to their evacuation and the lackluster beauraucratic process of the then Indian external affairs ministry. 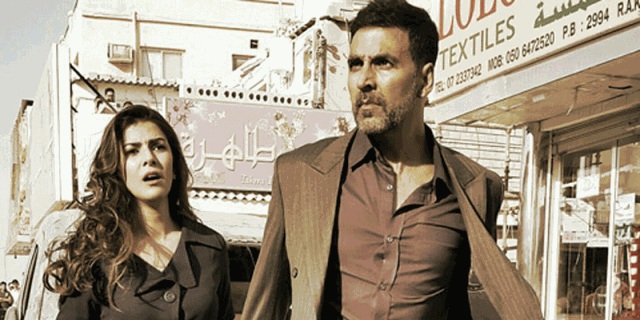 Screenplay and Direction: Airlift is a very deft movie made without any added dramatic effect and that is clearly visible in the way Raja Menon has put together the movie. It is shot realistically and the detailing is impressive. There are no spiced up revelations, the lead protagonist doesn’t end up fighting his advisories. Airlift maintains a whiff of humanity throughout its runtime and it takes a lot of courage and ambition to tell such an underknown story in such an ambitious manner. Airlift is one of the rare movies which entertains and educates. The only flaw we can think of in the screenplay is the over reliance on Akshay Kumar’s character to get everything done. It can’t possibly have been just one man doing all the work (and the makers themselves reveal this in the end credits).

Airlift is one of the most realistically shot and detailed big budget human dramas we have seen in Bollywood. The production design, the costume design, the set decoration all come together to make Airlift as authentic as possible within the budget constraints. The editing is also very good. The music of Airlift isn’t on your face and it does a good job of staying in the background and nurturing the mood of the film.

Acting: Akshay Kumar is the heart and soul of Airlift – which is great because it shows his restrained acting skills, and it’s also not so great because the story suffers from being over reliant on the life of just one man. Akshay Kumar keeps it subtle, and emotes through his eyes. We get to see a completely new side of Akshay in Airlift and it sure is better than the half baked outlandish characters he’s done in the last decade. The change in his character’s stance towards India is well brought out by the actor. Nimrat Kaur is a great inspired choice as the female lead of Airlift. Sadly, the role she is entrusted with could have been better written. She gets in and out of her Punjabi accent a lot of times. But accents don’t maketh a performance as Nimrat is excellent otherwise. Purab Kohli is first rate but Prakash Belawadi is short changed with a half haphazardly written character.