With the trailer release of Baby and Badlapur, 2015 is already shaping up to be one of the most promising years for Bollywood. Here is an interesting trivia on the importance of the letter ‘B’ and its significance in 2015 – the title of most big films that are lined up for next year start with ‘B’.

Baby: Rated as one of Akshay Kumar’s most liked trailers in recent times, Baby has already crossed a million view in less than 19 hours since its release. Neeraj Pandey is known for his strong script sense, and along with Akshay Kumar in a performance-oriented role, great music (T-Series home-production) and terrific cinematography; Baby is likely to open very well at the box office. Releasing on a great date (Republic Day falls on Monday), this one seems like a winner already.

Badlapur: Varun Dhawan who is on a winning spree after back-to-back hits (Student Of The Year, Main Tera Hero and Humpty Sharma Ki Dulhania) gets experimental with Badlapur. Again the teaser has been well-appreciated, with the critics lauding Varun for actually going out and trying something so different. A Cost effective project that will help Varun soar in his career and grow further as an actor. 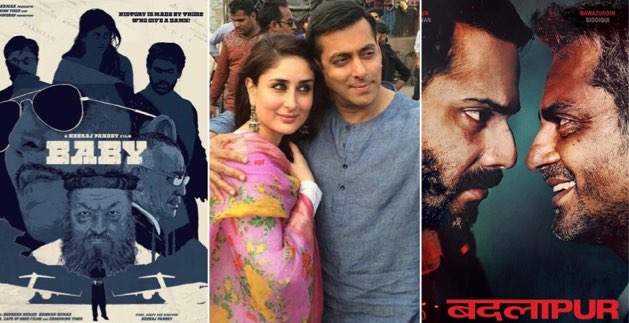 Bangistaan: After Fukrey, Excel Entertainment’s next is Bangistaan starring Pulkit Samrat and Ritesh Deshmukh. Farhan Akhtar’s production house is known for churning out great concept films and this one seems like an entertainer. The film is being directed by critic Karan Anshuman.

Bank Chor: Another high-concept film produced by Yash Raj films. This film was in the news for its casting where Kapil Sharma was originally signed. Now the film features Ritesh Deshmukh and Vivek Oberoi. Sources close to YRF say Bank Chor is a complete laugh-riot.

Bombay Velvet: Anurag Kashyap’s most-awaited and delayed film ‘Bombay Velvet’ staring Ranbir Kapoor and Anushka Kapoor has been in the news for the longest time. This film will mark Ranbir’s return to the big screen almost 2 years after the ‘Besharam’ debacle. Shot on a huge canvas and in complete secrecy, Bombay Velvet could go on to be a huge winner at the box office.

Bajirao Mastaani: The master is back after Ram Leela. Bajirao Mastaani is all set for a Christmas release. One of Sanjay Leela Bhansali’s most ambitious projects, stars Ranveer Singh, Deepika Padukone and Priyanka Chopra. Apparently entire cast and crew has been working hard on the film. Ranveer has been shaving his head every other day, and has allotted 300 days for the shoot. This one promises to be a magnum opus.

Bahubali (English: The One With Strong Arms) is an upcoming two-part Indian epic film releasing in Telugu. It will also be dubbed in Malayalam, Hindi and in several foreign languages. Baahubali is directed by S. S. Rajamouli and features Prabhas, Rana Daggubati, Anushka Shetty and Tamannaah in the lead roles. It’s the most expensive film produced ever in the history of Telugu cinema and was also one of the few films featured in BBC’s documentary on 100 Years of Indian cinema directed by Sanjeev Bhaskar. If you are wondering why we are posting it here, reliable sources have informed us that the film will get the widest Hindi release for a Telugu film ever!