Akshay Kumar has been hitting it out of the park recently by choosing to do innovative movies with a patriotic or a social angle (Baby, Airlift, Rustom, Jolly LLB2). And this strategy has started paying back very well for him. Now he’s back with another rooted patriotic (?) film in the form of Toilet Ek Prem Katha. The trailers have promised us a rooted film based in the Hindi heartland of India which highlights and brings to the fore an important social evil about the country. But that would mean nothing if the film isn’t entertaining. Is it?

Story: Keshav (Akshay) is a manglik and has to marry a cow to get rid of his manglikness. He’s 36 and still unmarried but eventually he sees a girl Jaya (Bhumi), who is a college topper and is almost a dozen or so years younger than him. He goes after her and clicks her photo and even uses her pics while advertising his cycle shop. Jaya flips out on him but as it always happens in Hindi films, she cools down and falls in love with him. They finally get married.. and that’s when shit hits the fan. Jaya discovers that there’s no toilet in Keshav’s house and all the women have to go to the fields to finish their early morning work. She decides to try it out but discovers perverts who follow the women during their activities. She gives Keshav an ultimatum to build a toilet in the house but Keshav’s father doesn’t want that because he thinks of a toilet in the house as an evil thing. Jaya leaves. Keshav has to then fight not only his father but also the government machinery and bureaucracy to get what his wife needs. 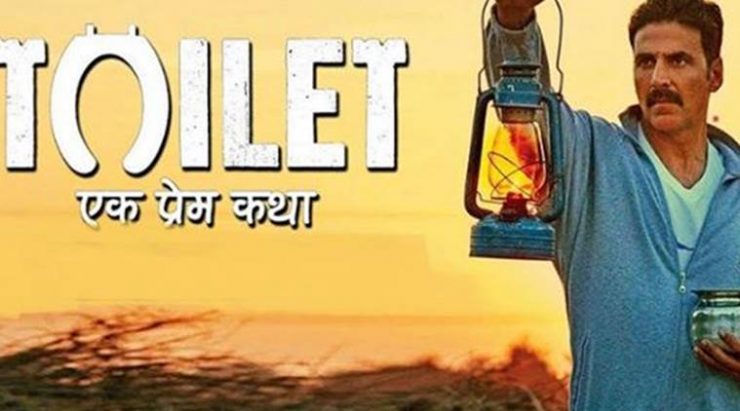 Review: Toilet Ek Prem Katha has all the makings for an uplifting important social message but the message gets bundled first by the love story which takes too long to come to fruition, and then by the overstretched fight of Keshav against the whole system. And what’s even more bothersome is that the film tries its level best not to anger the ruling government (a case of corruption shown in the film conveniently happened 5 years ago). But having said that, not all is lost with this film. It has its heart set in the right place. The love story is very rooted to desi values and the courtship period can be termed as cute (urban folk might call it stalking). Shree Narayan Singh, the director, tries his best to imbibe masala elements to this PSA of a film but misses out on subtlety which holds the film back. Thankfully enough though, Toilet Ek Prem Katha doesn’t bore too much even with its almost 3 hours long running time. And the story of a man fighting the system can be inspiring to a lot of people.

Toilet Ek Prem Katha has been shot in the Mathura region of the country. The camerawork isn’t great but it sticks to the directors plan and keeps things simple. The production design is shabby and costume design is authentic. The editing of Toilet Ek Prem Katha is a bit lazy because there’s no reason the film needed to be this long (2:45 minutes). The music is average with none of the songs making a huge mark. Hans Mat Pagli, Lath Maar and Bakheda all work well within the context of the movie.

Acting: Akshay Kumar looks a bit jaded but his look is spot on. And he is in fine form as Keshav, the naive but middle aged newly married husband who wants his wife back. He makes all the right noises with his dialogue delivery and mannerisms. It is great to see an Indian superstar regularly talk about social upliftment in his films. Bhumi Pednekar returns in her second film after Dum Laga Ke Haisha, and she has the potential to become the lead actress in movies which are set in the Hindi heartland of the country. She plays her part well, and with confidence but gets overshadowed by the stardom and presence of Akshay Kumar. Divyendu Sharma is there as a comic sidekick and does his job well. Sudhir Pandey, the veteran actor, is an effort of fine casting and is perfect in his role. Anupam Kher’s presence in the film officially makes it a ruling government manifesto.

Conclusion: Toilet Ek Prem Katha can be grating; it is overstretched, has a needlessly long love story but eventually it has its heart set in the right place. It highlights one of the most important problems prevalent in our country today – open defecation. And even if it convinces one family to build a toilet it would have done its job. What also helps the film is that it doesn’t bore much even with such a long running time. Films with a socially important message need entertainment to make it work and Toilet ends up being a film that is not short on the entertainment factor. Cityfolk might have trouble connecting with the film’s plot but rural folk are sure to like the film’s rootedness.