The first release of the year has more often than not suffered from ill-fate in Bollywood. Therefore, it has been very courageous of Boney Kapoor to make their film Tevar the first big release of 2015. Tevar is the remake of the popular Telugu film ‘Okkadu’ but what has made it seem different is the setting. The trailers have created a bit of curiosity over the film and charting the box office numbers of Tevar could be an interesting proposition. But eventually all that matters is the quality and entertainment value of the film. Is it as entertaining as the original Telugu version? Is Arjun Kapoor able to establish himself as a mass hero?

Story: Pintu (Arjun) is the son of Agra’s SP Satyapal (Raj Babbar) and he is an avid kabbadi player. On the other hand, Radhika is the sister of a news anchor who does scathing news reports on an evil politician’s brother Gajender Singh (Manoj Bajpayee). Gajender falls in love with Radhika and forcefully tries to marry her. When Radhika refuses, Gajender kills her brother. Scared and unsurprisingly shaken, Radhika’s parents decide to send her abroad. Whilst trying to escape Mathura, Gajender’s henchman find her and there she is rescued by Pintu. A search operation begins and lots of twists and turns take place. Meanwhile, Pintu also has to get to his kabaddi match. Does all of it come through? Does the couple manage to escape? What happens to Gajender? To know more, watch the film! 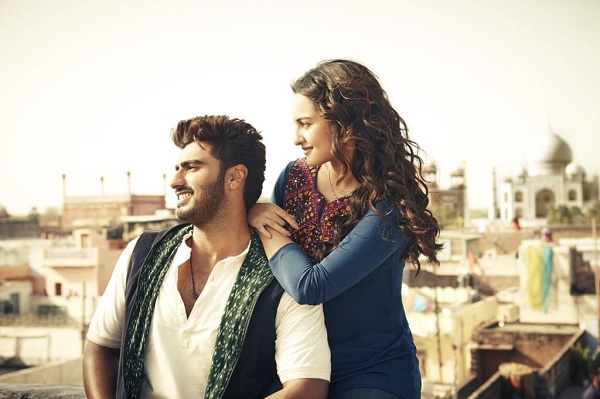 Amit Ravendernath Sharma, one of the most prolific ad directors in the industry, knows the technicalities of filmmaking. Therefore, it doesn’t come across as a surprise when Tevar is a technically accomplished film. But it lags behind in storytelling with the film feeling more like a star vehicle than a proper story being told through the medium of cinema. Tevar wasn’t expected to be a masterpiece either, so that can be excused. The film is entertaining for most parts, the action scenes have been stylishly shot and it also has a fantastic villain in Manoj Bajpayee.

As has been mentioned previously, Amit Sharma is adept at making Tevar look technically astute having directed so many ad films in the past. The cinematography of Tevar is one of the best things about it as the cinematographer has been able to capture the essence of Uttar Pradesh through his lens. The costumes are a little loud but they go with the genre of the film. The editing, however, could have been tighter.

The music of Tevar is decent with only two songs making a mark. The Superman soundtrack where Pintu proclaims his love for Salman Khan is highly energetic and memorable. Shruti Hassaan has sung a song called Joganiya which is soothing to the ears and has been shot aesthetically. The other songs don’t make a mark.

Acting: Make no mistake, Tevar is a star-driven vehicle that Boney Kapoor is hoping will make Arjun a superstar. The film has been put together to make him look larger than life. All the action, drama and scenes highlight just one man: Arjun Kapoor. And he is good at portraying the heroic character that he has been asked to play. His mannerisms are up to the mark at playing the hinterland desi hero. But his expressions still leave a lot to be desired. Sonakshi plays the same character that she plays in all of her films and it is now getting increasingly difficult to consider her a film actress because she now plays the same role in episode after episode (in her case, it has always been a male-driven film). Manoj Bajpayee steals the show with his mad lover turned villainous avenger role. Raj Babbar and Subrat Dutta are fine in their roles.

Tevar is a decent entertainer that, more or less, gives what it promises. It has been put together in a technically astute manner but is filled with the normal masala film clichés. If you are expecting a film that will entertain, and you happen to like masala films, then Tevar won’t disappoint you.

Go for it if you like masala movies
Advertisements