Bollywood superstar Shahrukh Khan and ‘Paa’ director R Balki have joined hands to produce a short film, which is scheduled to release in cinemas on March 8th 2013.

Mumbai Mirror quotes a source close to R Balki as saying “Balki met SRK some time back in Mumbai and discussed the subject. The script is a very sensitive one, and he wanted Shahrukh Khan to be the face of the project. This was followed by a string of meetings, which were kept under wraps to avoid unnecessary speculation, till such time the director managed to convince the actor.”

While not much has been revealed about the project, it’s likely to be women-centric, as the film releases in theatres on Women’s Day.

Shahrukh has already shot his part and Balki is currently editing the short film.

Some pictures of SRK and R Balki who are working together for the first time. Have a look! 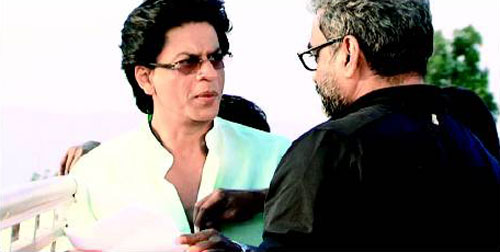 SRK and Balki working together