Superstar Rajinikanth, known for his unassuming attitude and charming aura, celebrated his 62nd birthday Wednesday with close friends and family at his residence here.

“Though early in the morning he stepped out on to his balcony to wave to his fans outside his house, he spent the rest of the day with his family and select friends from the industry,” a source from the industry told IANS.

Nevertheless, Rajinikanth fans had every reason to celebrate to the fullest. Members of a Rajinikanth fans association cut cakes and unfolded banners in different parts of the city to mark this special day.

“‘12.12.12’ is a very special day and our superstar’s birthday falling on the same day makes it much more auspicious. This day comes only once in 100 years and, therefore, we wanted to make the best of it,” Sarathy, a member of Rajinikanth fans association, told IANS.

“We also performed puja in the temple, wishing our superstar health, happiness and prosperity,” he added.

Meanwhile, some members of the Tamil film industry also celebrated the actor’s birthday in style.

At the audio launch of a Tamil film titled “Payapulla”, a 63-kg cake was cut by Rajinikanth’s mentor, K. Balachander.

On the other hand, two books – “My Days with Baasha – The Rajinikanth Phenomenon” and “Rajinikanth – 12.12.12, A Birthday Special” were launched. The former is authored by veteran southern filmmaker Suresh Krissna, and the latter is published by The Hindu.

Rajinikanth’s “Sivaji 3D” also hit screens Wednesday. All the fifteen screens showing the 3D film across Chennai had sold-out shows. The film was released in Tamil Nadu, Kerala and Karnataka. 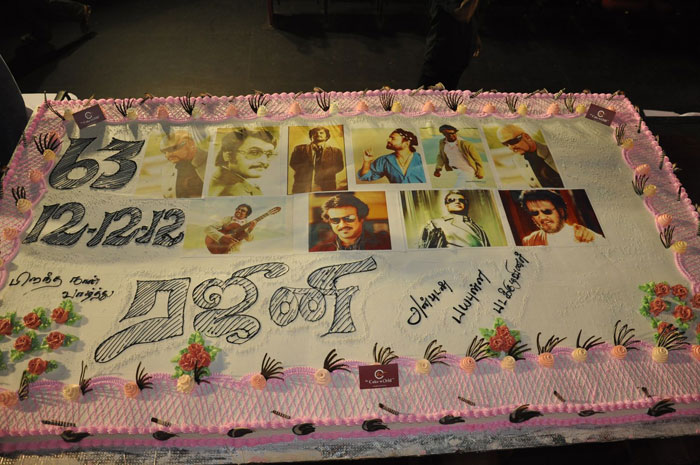 A 63 kgs cake for Rajinikanth at “Payapulla” audio launch