It’s common knowledge now that Bollywood superstar Shahrukh Khan is tied with the legendary Dilip Kumar for the highest number of Filmfare Best Actor wins with 8 awards each. What a few sections of the general public debate about, is if SRK really deserved all those 8 awards. In this piece, I will discuss each of those 8 wins of Shahrukh and analyse what made him win those awards, look at the competition for that particular year and if he really deserved to win it. As is obvious, it is an opinion piece, respect the opinions and if you have any qualms about anything feel free to let your opinion be known in a civilized manner.

A few things to keep in mind are that when SRK arrived the Bollywood was ruled by the earlier generation (Sunny Deol/Sanjay Dutt/Anil Kapoor/Jackie Shroff) and they were not breaking any new ground. Salman and Aamir were there too, but with the arrival of SRK in Bollywood the stakes increased, freshness was attained yet again and other actors stepped up their game – most were slow, though. At the turn of the new millenium, the competition became really ardous and it would not have been a cake walk (not that it ever was) for anyone to win the Best Actor award from thereoin (with the exception of a few years). 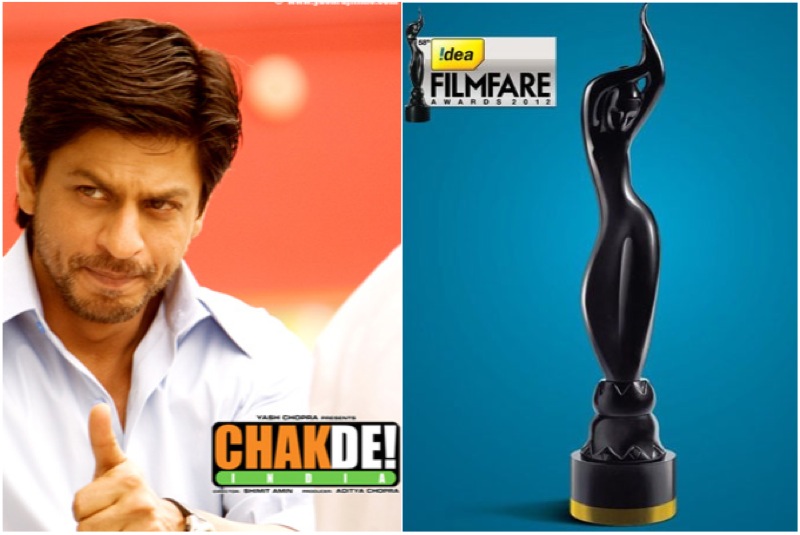 SRK won his first Filmfare award for a negative character in this cult Abbas-Mustan thriller. His performance received widespread acclaim and he became a household name soon after. The only credible competition that year came from Sanjay Dutt (he also played a negative character in Khalnayak) and Jackie Shroff (Gardish). A lot of people would say  SRK did not deserve this award ahead of Sanjay Dutt, but what made him win it was Sanjay Dutt’s supposed involvement in the Bombay Blasts and the negative publicity that he received. Khalnayak and Baazigar were both big hits, and it might have been a toss-off in the end. Either way, SRK was established as a star after Baazigar.

Even Shahrukh’s most ardent haters will reluctantly agree that there was no way SRK was not going to win the Filmfare Best Actor for delivering one of the biggest hits and one of the most memorable and talked about performances of Hindi cinema. The only real contender that year was Aamir Khan for Rangeela. But, no one could have taken the award away from SRK that year. DDLJ transformed SRK into a Superstar.

SRK won his third Filmfare best actor for this movie. If ever he got lucky, it was this year. Looking back, it’s evident that the performances of Anil Kapoor in Virasat and of Kamal Hassaan in Chachia 420 were better. But the jury then did not have the advantage of hindsight. Simply put, they awarded SRK for being part of one of the biggest hits of the year. Also, the charm of this film may have faded away a bit now but at that time, the music of the film and the film itself became quite a rage.

Another no-brainer like DDLJ. Another all-time blockbuster like DDLJ. Not only did this film redefine friendship in Hindi cinema, but also gave SRK a new identity. The only real contender that year was Aamir Khan for Ghulam and Ajay Devgn for Zakhm. But yet again, they did not have the commercial recognition behind them for both their films and their performances.

2002 was a particularly bad year for Hindi cinema when you know that Bobby Deol and Vivek Oberoi were nominated for the Filmfare Best Actor Award that year. SRK won his 5th Filmfare after a rather barren patch of 3 years. His performance as Devdas Mukherjee received critical and commercial acclaim. Time Magazine listed the movie as one of the Top 10 movies of the new millenium. Ajay Devgn (The Legend Of Bhagat Singh) gave him tough competition and eventually walked away with only the Critics’ award for lack of commercial appeal.

2004 was well and truly Shahrukh Khan’s year. He had 3 of the 5 nominations. Veer Zaara and Main Hoon Na were much bigger hits but SRK won his 6th Filmfare Best Actor Award for the commercial failure Swades. It was bold (but not wrong) on their part to give it to SRK for Swades since he would otherwise have received the award for either Veer Zaara or Main Hoon Na. Swades, in my opinion, was SRK’s best ever acting performance and it is a pity that he did not win the National Award that year.

Unlike Swades, which was a commercial failure, Chak De India became a Super Hit and SRK’s brilliant performance as the Indian Hockey Team coach Kabir Khan got due recognition from the audience (alongwith the critics). He won over his detractors with this film. The contenders that year were Abhishek Bachchan for Guru and Darsheel Safary for Taare Zameen Par (Darsheel won the Critics’ Award eventually). Abhishek was very unlucky that his best acting performance came in the year of Chak De! India and Taare Zameen Par.

SRK’s latest Filmfare Award came for his International Blockbuster My Name Is Khan. The competition that year was the toughest yet. Ajay Devgn for Once Upon a Time in Mumbaai, Ranbir Kapoor for Raajneeti, Hrithik Roshan for Guzaarish and Salman Khan for the mega Hit Dabangg 2 gave credible and lauded performances. Hrithik lost out due the commercial failure of his film. Ajay Devgn lost out for the genre of the film he was a part of, since action dramas are looked down upon these days. Ranbir Kapoor lost out because he was a part of a highly talented ensemble cast and it would’ve been wrong to just award him and not the others. Salman Khan gave one of his best and most appreciated performances ever as the boisterous and funny cop Chulbul Pandey. It came down to awarding either Salman Khan or SRK. But the jury chose SRK because his was the most appreciated performance of the year (even though the film’s domestic performance was not record-breaking). SRK played a mentally disabled person and the biggest thing that went in it’s favour was that he did not make Rizwan Khan look like a caricature. That’s where his victory lay. Salman, as Chulbul Pandey, according to most people was just being himself (that is what worked, hey!) but SRK was more or less sure to take away the award. (I personally would have given it to Hrithik).

This was a piece about dissecting and trying to understand what went behind awarding Shahrukh those 8 Filmfare Best Actor awards. I think it’s very clear for me by the end of this piece that he deserved at least 6 of the 8 awards he received looking at the success of those films, the competition he had that year and the general sentiment among the public at that time. He did not win any Best Actor award for Kabhi Haan Kabhi Naa, Kal Ho Na Ho, Mohabbatein, Don, Dil Se and Kabhi Alvida Naa Kehna, which were some of his other appreciated performances. On any other day, he could have won awards for these performances as well. But he did not. So, 8 awards are more or less indicative of the dominance of his films and his performances in the last 20 odd years.

The criteria for awarding the Best actor award goes in the following order (looking at the awarding patterns tells me this):

In the early 90s, not many performances fulfilled the first criteria of being commercial appreciated and hence, the competition was much less. With the passage of time our films have evolved and our actors are giving better performances with each film. Hence, the competition SRK received for MNIK was way more than what he received for Baazigar. That is also probably why he did not win the award this year for Jab Tak Hai Jaan as Ranbir Kapoor’s performance was unanimously praised by both critics and general audiences. Henceforth, if Shahrukh is to win another award he has to be a part of a commercially successful film and his performance in that film has to be loved and praised by critics and audiences alike.

P.S. SRK’s haters will very obviously believe that he deserved none of the 8 awards he got. Hate subsides with bias and goes against logic, much like love. This piece is an opinion piece and respect the author’s opinion while commenting. You are free to put up your own opinions but only in a civilized and abuse free manner.