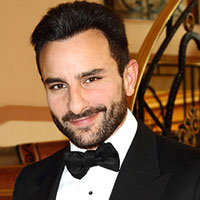 Bollywood star Saif Ali Khan has been charged for attacking Iqbal Sharma, a South African businessman at the Taj Hotel in Mumbai in February 2012.

The actor has been charged for voluntarily causing grievous hurt (Section 325) and Section 34 of the IPC (Indian Penal Code) has been made against him with the case going up for hearing on April 30, according to reports.

Khan was taken under custody for assaulting Iqbal Sharma in a Japanese restaurant at the Taj on February 22, 2012.

Sharma, a South African Government trade official had asked the actor and his friends (Kareena Kapoor and Amrita Arora) to reduce the noise coming from their table.

Sharma has reported to the police while making the complaint that when he objected to the noise that Khan and his group were making, Khan had advised him to leave the place and frequent a library, if he did not like the noise.

According to the NRI, Saif had reportedly used abusive words and it later escalated ending in him getting hit by Khan. He also reported that when his father-in-law tried to soothe matters, he was attacked as well.

On hearing Sharma’s complaint, the actor and his friends were taken under section 325 of Indian Penal Code.

Saif Ali Khan and his friends had surrendered to the police and were later released on bail.