Shah Rukh Khan tries his hand at the gangster flick with Raees, and returns to the screen as a full fledged action hero after long. With two box office disappointments in Dilwale and Fan, Raees is an important film for the superstar and it has to work wonders for him. Raees has been plagued in one controversy after another, and its release in itself is a success. Mahira Khan makes her debut in India, and Rahul Dhokalia tries his luck at a commercial flick for the first time. Will Raees end up making the makers even more Raees? Time to find out.

Story: Raees Alam (Shah Rukh Khan) gets into the bootlegging business after being taught by his mother early on in life that there’s no religion bigger than business. He treads the line of law and becomes a big messiah in his area. In between all this, he also falls in love and marries Aasiya (Mahira Khan). But things start going awry when Police officer Jaideep Majmudar (Nawazuddin Siddiqui) enters the scene and vows to take him down. But Raees always gets the upper hand. He makes things complicated for him when he decides to become a politician. There is a communal angle, there is a riot angle, and there is also a Bombay blasts angle. The makers didn’t avoid those difficult plot points here.

Screenplay and Direction: Rahul Dholakia walks on a narrow edge here and could easily have gone overboard with very sensitive topics. He makes a palatable, almost family friendly version of a gangster film. It isn’t the most refined, and it doesn’t work all the time, but Raees has got a swagger about it which has not been seen in Hindi cinema for quite sometime. It is a throwback to the 70s angry young man movies of Amitabh Bachchan, and quite interestingly plays out like a film from that era. The first half moves at a frantic pace, but the second half slackens when the focus shifts on Robinhood Raees. It suffers from the post interval lull syndrome, but the climax redeems the movie to an extent. Also, credit must go to the makers for daring to make a move on identity politics and masking it in a commercial entertainer avatar. 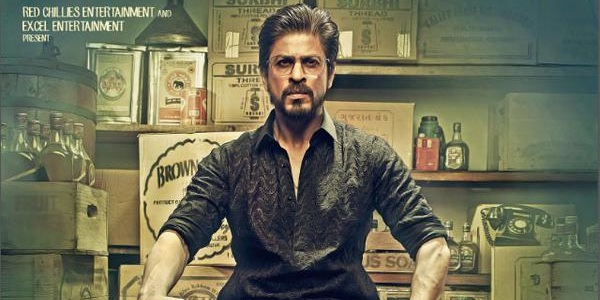 Raees has been shot at a big scale and for a movie which is rooted in realism, the sets of Raees’ mohalla don’t look artificial or made up at all. The action choreography is good but they might come across as too over-the-top to some. The costume design and production design both work well to create the bygone era of late 80s and early 90s. The music of Raees hits the mark with 3 songs working well. Laila, Zaalima and Udi Udi Jaaye are all ear-worms and the other songs are situational. The background score of Raees is one of the best parts of the movie. It adds an extra layer to this gangster flick.

Acting: What can be said about Shah Rukh Khan that hasn’t already been said? Yes, questions can be asked about the character he is portraying but SRK is in top form in Raees. As the title character, he imbibes the rogue Robinhood Raees and his expressions and characteristics make us feel the inner angst of Raees Alam. Nawazuddin Siddiqui is an able supporter and ends up stealing most of his scenes. He has got the best dialogues, and carries them with elan. He elevates the dynamic between Raees and the law to another level. Mahira Khan makes a stunning debut and holds her own against such superb actors. Mohd. Zeeshan Ayub is again dependably good. Atul Kulkarni is a revelation. Narendra Jha and Jaideep Ahlawat provide good support too.

Conclusion: Raees is not a safe film, in fact it is a daring film for the makers to have made and for Shah Rukh Khan to have acted in especially after the brickbats he has received during the last few years. Raees is a flawed film, but it is an entertaining flawed film. There are moments which are bound to make the viewers uneasy but this is where the makers deserve credit for going the extra mile. The second half drags on a bit, the climax doesn’t feel extraordinary and the plot points are nothing that we haven’t seen before, especially in the second half. But if you want to see mass hysteria and crazy star driven cinema then Raees should not be missed. Movies like these will soon go extinct. Raees deserves to be watched once just for that.