Kabir Khan has become one of the most sought after directors in Bollywood after Bajrangi Bhaijaan. He has given solid hits in the form of New York and Ek Tha Tiger, so it is not as if Bajrangi Bhaijaan was a fluke. He’s teamed up with Saif Ali Khan for the first time and with Katrina for the third time in Phantom. The trailers have promised a fast-paced espionage action thriller so the expectations are bound to be dictated by that expectation. Does Kabir Khan deliver big once again?

Story: Daniyal Khan (Saif) is a court-marshalled former Indian army guy who lives in solitude away from anyone else in oblivion. He gets recruited by RAW’s head (Sabyasachi Chakraborty) for a top secret mission to kill off all the 26/11 operators. He is a one man force but he gets the help of a former RAW agent Nawaz Mistry (Katrina) in London. Daniyal goes about the job of eliminating every mastermind involved in the massacre of 26/11. He then lands up in Pakistan to kill off the main mastermind Harris Sayeed and by then Daniyal-Nawaz have become true partners in crime (irony). Are they able to eliminate Harris? And if they are able to do it, do they get out of Pakistan safely? 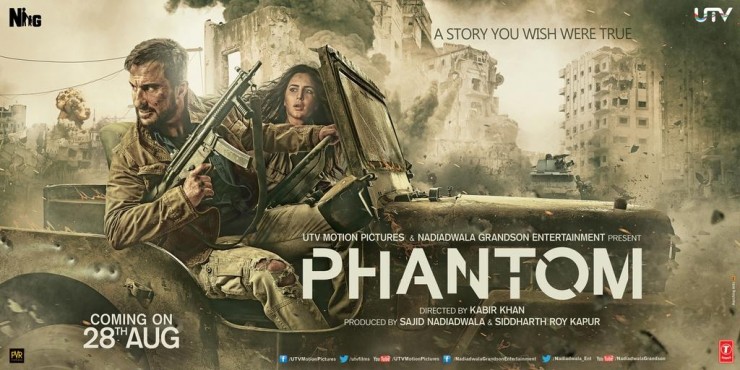 Screenplay and Direction: Kabir Khan is once again in fine form using his previous documentary making experience and is able to capture the war zones and locales across the world very authentically in his frames. The story takes some time to setup and the first half is especially a slog but Phantom finds its footing in the second half. Once the main characters enter Pakistan (just like they did in Bajrangi) in the second half, things begin falling in place which leads to a particularly exhilarating climax and a sombre post-climatic scene. Basically, if you can go along with the frivolousness of the story, Phantom will turn out to be a fascinating movie watching experience. The loopholes aside, Kabir again delivers a good film in Phantom.

Technically, Phantom is as good as any action movie made in Bollywood so far. The war scene in Syria was too close to reality for comfort. The production design makes the film big in scale and size. The editing is also nifty and actually helps in keeping the story interesting and breezy in the sloggy first half. The background score isn’t mindnumbingly high volume and the songs are decent enough with Afghan Jalebi being the standout song.

Acting: Saif Ali Khan makes a good return to form with Phantom. The emotional depth of his character is not touched upon a lot but he still manages to squeeze out some depth from his character. Having said that, it felt like he was somewhere channeling his Agent Vinod act sometimes. Katrina Kaif seemed like a misfit for this character in the trailers, but in the film she is a lot more tolerable and even emotes to the best of her abilities. Mohammed Zeeshan Ayyub shines once more in his role. It is only a matter of time before he becomes a breakout star. Sabyasachi Chakraborty is also nicely cast as the RAW head.

Conclusion: Phantom is a far fetched idea which we Indians hope was the reality. And it has been turned into a full length feature film. The nature and genre of the film won’t appeal to a lot of people and it will probably not be a big commercial hit, but Phantom deserves to be watched for the subtle patriotism in the film and for the solid second half. If you like your movies to be fluffy and don’t want to apply your brain while watching movies, then Phantom may not be the best movie for you. But if you like your movies to be logical and topical, with dollops of action and adventure, then Phantom will be a great watch for you. We would definitely recommend Phantom to everyone.