There are plenty of reasons a film can make us, the viewer, excited. The director (and his previous works), the cast, the story and the content can make us eagerly await the release of a film. As Bollywood is changing, the emphasis of the audience towards watching a film not starring a major Superstar is changing, as well. So here are some of the Most awaited Bollywood movies releasing between April and June 2013, that we are looking forward to. 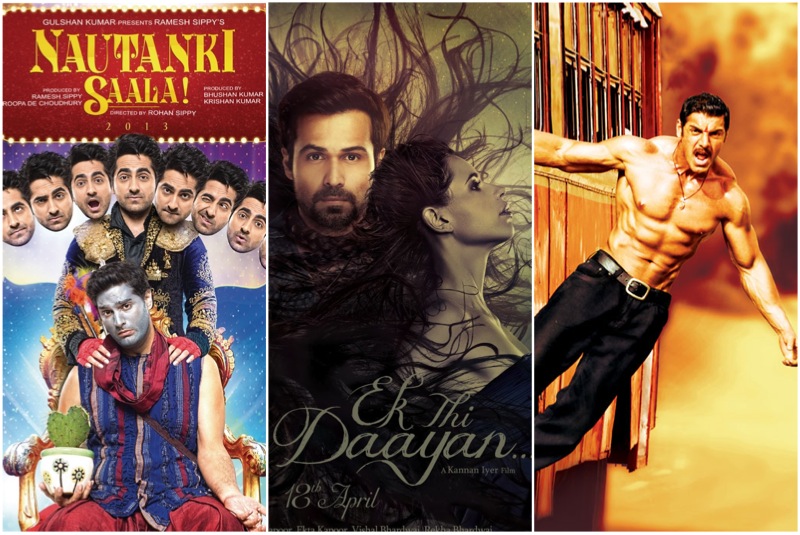 With Vicky Donor, not only has Ayushmann stamped his arrival in Bollywood but also made everyone excited about how he will fare in the coming years and which films he plans to sign. He signed this buddy comedy, directed by Rohan Sippy, which is a remake of the French cult classic ‘Afres Vous’. Nautanki Saala has us excited not only because it is the Indian take on such a big International hit but also because of Rohan Sippy’s track record with the buddy comedy genre – Bluffmaster was a fine film. Also, Abhishek Bachchan has a cameo in the film.

Balaji is betting big with this film. Emraan Hashmi has been involved with the horror genre before (his Raaz films were rousing successes) but Ek Thi Daayan is looking unlike any horror film Hindi film audiences are accustomed to. The three leading ladies – Konkona Sen Sharma, Kalki Koechlin and Huma Qureshi, are all immensely talented. The trailer and poster have been met with highly enthusiastic response. Come 18th April, and the horror genre might have been reinvented by Bollywood once and for all.

The 2nd Balaji release in the list. The sequel to the hit ‘Shootout at Lokhandwala’, stars high pedigree actors like Manoj Bajpayee, Anil Kapoor, Ronit Roy. It also stars John Abraham, who is looking to reinvent himself again with this film. Priyanka Chopra and Sunny Leone, have appeared in an item song each. What gets us excited about ‘Shootout At Wadala’ is that it is based on a very highly rated best selling book – S Hussain Zaidi’s Dongri to Dubai. It will be interesting to see how Sanjay Gupta adapts the story on the big screen. We are surely looking forward to this one.

When one of Bollywood’s biggest producers like Karan Johar decides to produce a small budget 4 crore film like Gippi, you automatically know there must be something very special about it. Gippi is a story of a 13 year old kid, played by Delhi girl Riya Vij. Ajay Mukherji’s assistant from ‘Wake Up Sid’, Sonam Nair, makes her debut as a director. The most interesting facet of Sonam directing Gippi is that she is the first lady debutante director to be launched by Dharma Productions. We think this could turn out to be one of the little gems of 2013.

Zanjeer is one of Hindi cinema’s most iconic films and when Apoorva Lakhia decided to remake the film with Telugu Superstar, Ram Charan, he had us all excited. When actors like Priyanka Chopra and Sanjay Dutt were signed up, our interest in this film grew even further. We are looking forward to how Apoorva has adapted such an iconic story and what (if any) story angles has he added or subtracted from the film. Dealing with the story keeping today’s audiences in mind without hurting the sensibilities of the yesteryear film lovers is going to be the most difficult task for Lakhia. Either way, we are looking forward to Zanjeer.

Tell us which films you are looking forward to in the second quarter or any quarter if you wish to! Also, predict which films will make it to Part 2 of the ‘Most Awaited Bollywood Movies of 2013’ list.

From the list above, which is your most awaited upcoming film this year? Vote now!