When Gulzar is back to writing a movie after 17 long years, you anticipate something beautiful. Couple that with the direction of Rakeysh Omprakash Mehra, expectations are raised to the roof. Mirzya is one such movie where it has everything going for it on paper. Harshvardhan Kapoor couldn’t have found himself a better film to debut with. On paper. But does it translate to an epic movie on the big screen? Time to find out.

Story: Time period 1: Present time. Mohnish and Suchitra are 12 year old kids in Jodhpur, who obviously like each other a lot but fate has them moving away from each other. A few years later they meet again in different circumstances. Suchitra (Saiyami Kher) is now the fiancée of HRH Prince Karan of Udaipur (Anuj Choudhry). Her horseriding teacher is Adil Mirza (Harshvardhan). They have a romantic tension brooding inside them which comes to the surface when Suchitra learns that Adil is the same Mohnish she encountered so many years back. Time period 2: This depicts the epic romance of Mirza Sahibaan where Sahibaan eloped on her wedding day to be with her lover Mirza. But facing with the possibility of a fight between her lover and her brothers she breaks off the tips of Mirza’s arrows which results in his death.

Screenplay and Direction: Rakeysh Omprakash Mehra shoots Mirzya like a poetry in motion where every shot is carefully constructed, the narrative is thoughtfully evoked by beautiful narration and time periods are shown in sync with each other. But inspite of everything that is so so good about Mirzya, it doesn’t work as a movie because the two central characters are overshadowed by the technical finesse of the movie. This doesn’t bode well for the movie as the primary reason a movie works is the story. And Mirzya doesn’t do a good job of showcasing it’s story. There’s a hodgepodge of feelings and illogical decisions made by characters which don’t have any justification. 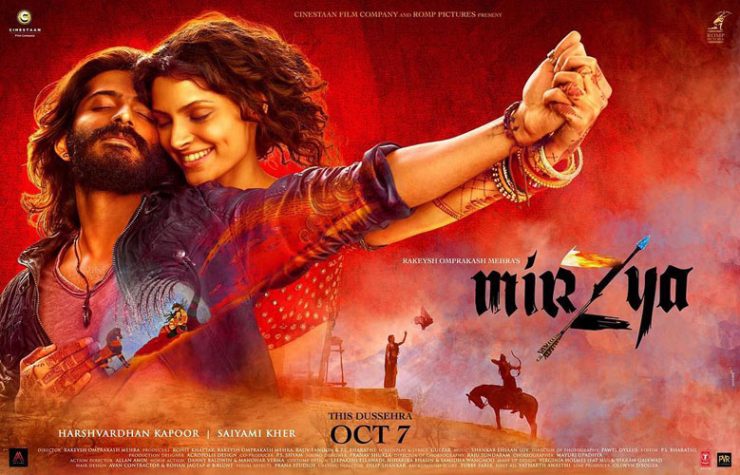 Miscellaneous and Music: Technically speaking, Mirzya is probably the finest Bollywood movie of the year. The cinematography by Polish cinematographer Pawel Dyllus is epic in the truest sense. The frames constructed look gorgeous. This is also because of the topography selected and nurtured by the production design team. Mirzya isn’t too long even with so many slow motion shots. Credit to the editor for that. The music of Mirzya is apt for the movie. The movie is a romantic ballad and the narration takes the help of the songs and the music to tell its story.

Acting: Harshvardhan Kapoor’s acting reeks of months of grooming and hard work. This clearly shows how seriously he took his acting gig but it also shows he isn’t a natural like his father Anil Kapoor. Saiyami Kher is a good actress and even though she looks unconventionally beautiful, she never looks out of place in this movie. One man who rises above the movie is Anuj Choudhry who plays Karan. He showcases the inner turmoil and deep sense of humiliation of the Prince very well. If only the movie had more meat for that role. Art Malik, Om Puri and KK Raina all play their parts well.

Conclusion: Mirzya is a movie which works so much better as a music video. It looks stunning but you don’t feel anything. It sounds stunning but you don’t feel anything. A movie doesn’t work if the audience don’t get a feel of the characters. Rakeysh Omprakash Mehra’s movies have worked so well in the past because he made the audiences a part of the story. In Mirzya, he completely falters in that aspect. Having said that, if you enjoy your slow romantic ballads and beautiful cinematography then Mirzya is the best film for you to enjoy and ponder over.

Not for those who seek entertainment from films.
Advertisements