Last quarter of 2012 isn’t exactly going as per plans. ‘Jab Tak Hai Jaan’, ‘Son of Sardaar’, ‘Talaash’ and ‘Khiladi 786’, all biggies boasting of superstar actors, were expected to put the box office on fire. Wait, before the box office comes in, they were also expected to be classics. Okay, let’s keep ‘Son of Sardaar’ and ‘Khiladi 786’ out of it. After all, the makers never promised a film that will be remembered or acclaimed for it’s content. 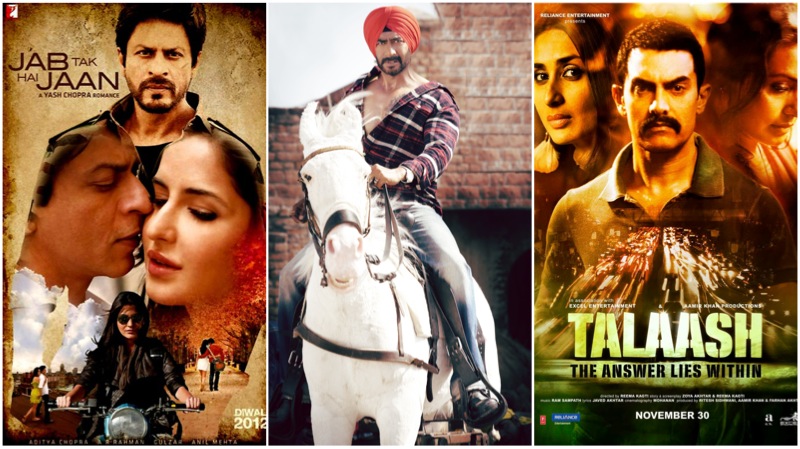 However, ‘Jab Tak Hai Jaan’ and ‘Talaash’ were expected to be on these lines, at least amongst the audience. One can go on and on about the ‘wow-this-film-looks-fab-on-paper’ conversations that were centred around the Shahrukh Khan and Aamir Khan starrers. In fact at the beginning of 2012, no one would have doubted the box office journey that these films would take. Content or no content! In the middle of this all, there came ‘Son of Sardaar’.

The results though have been a tad underwhelming!

Despite the centuries that two of these films have already scored, the fact still remains that they couldn’t score in two departments – ‘universal acceptance’ and ‘instant coffee results’. Yes, the argument would be that quite a few ‘so-called’ Bollywood blockbusters in the 100 crore club haven’t quite seen all around acceptance coming for them. Agree. However what they scored was providing ‘instant’ results.

For Diwali biggies it was always going to be difficult to accomplish that due to a clash. However if only there was ‘universal acceptance’, they would have at least continued to score ‘heavily’ in the second week. That didn’t happen and the results were there to be seen when Irrfan Khan’s ‘Life of Pi’ had collections higher than JTHJ and SOS.

With all films set to end their run by the time ‘Dabangg 2’ arrives next week, JTHJ collections would be best ever for Shahrukh but only a little better than ‘Ra. One’. As for ‘Son of Sardaar’, it too has just scraped through the 100 crore mark, as was the case with ‘Singham’ and ‘Bol Bachchan’.

The question that arises is – ‘Is this all that was expected from these films?’ Leave aside the crores earned and the profit/loss figure, weren’t these films expected to provide wholesome entertainment to audience? These are early days for ‘Talaash’ but same holds true for that as well which, after being pitched as THE Aamir Khan movie in the offering, it hasn’t quite seen all around accolades either from audience or critics.

Didn’t audience deserve better? Was the wait for these biggies indeed worth it?