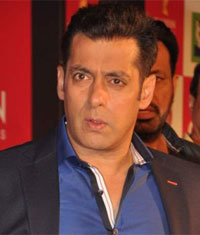 Bollywood superstar Salman Khan, who has more than 5 films in the 100 crore club, says he does not understand the ‘100 crore game’ at all.

Talking about the last time he lost his cool, the actor at the Bigg Boss 7 press conference said “Last time I lost my cool. I lost it the year before as well. I think they were disrespectful to Sanju (Sanjay Dutt who co-hosted season five with him). I remember that stuck in my head for two weeks and I couldn’t handle that.”

“As a person when I watch the show, I detach myself. As a host I am only there on Friday and Saturday. You go to the house as a common man. You are actually sharing your life with so many people. You behave like you are with your family, but that is your real personality.”

Every year “Bigg Boss” gets into controversies when the inmates indulge in acrimonious fights, use bad language etc.

“I am sure they are going to have problems. But if they get along fine, tasks will be on a level that they will be forced to be broken.”

He said: “They (inmates) are doing a big favour by letting you in their house, lives, and personal space. It is a very big thing.”

“So much you can learn from this. It’s easy to say he or she was wrong, but when we are there in that situation, you think I would have reacted like this,” he added.

Asked if he would ever like to be in the “Bigg Boss” house, Salman said jokingly: “It’s difficult. I don’t think I want to. Not for any other reason, but I will be too entertaining inside and TRPs would hit the roof and other people won’t be able to hit that.”