Story: Heroine is about Mahi Arora (Kareena), a successful Bollywood actress, whose position in the industry is under constant threat with rival actresses and newcomers. Mahi is madly in love with married superstar Aryan Khanna (Arjun), who is on the verge of a divorce with his wife Isha (Shilpi Sharma). Mahi is insecure about her relationship, as Aryan is unwilling to commit marriage. When Aryan agrees to do a love-making scene in one of his films, without Mahi’s consent, the two breakup. 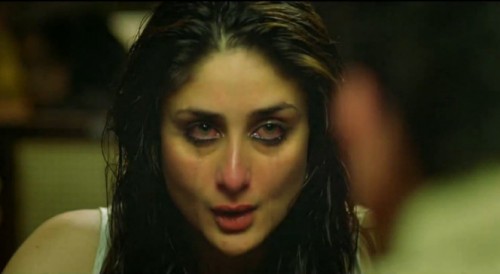 Enter publicist Pallavi (Divya Dutta), who approaches Mahi with a proposal to change her image and build her brand. Pallavi does her job and Mahi is back in news and her falling career revives once again. She starts dating Angad (Randeep Hooda), vice captain of the Indian Cricket team. He helps her get a role in a film with superstar Abbas Khan (Sanjay Suri). Career-wise things go from bad to worse, even though her film does well at the box-office, as Abbas Khan shortens her role in the film. Critics call her a glam-doll, a non-actress. What does Mahi do next? How does she survive alcohol addiction, the constant threat to her position in the industry and most importantly how does she battle her own insecurities?

For a film that promises an insiders take on the Bollywood film industry, Heroine promises to be a fine film initially, but falls flat when Bhandarkar takes the dark and depressing route. Apart from a few scenes just before the interval when Mahi’s career begins to revive and her relationship with Angad blossoms, Heroine as a whole remains terribly depressing.

Strangely, the film has way too many similarities to Madhur Bhandarkar’s Fashion. Gay designers and journalists (with typical mannerisms), excessive smoking/drinking, sexual politics, back-biting, bitching.. you name it and Heroine has got it all. What worked for Fashion was the inspiring rise of Meghna Mathur, here Madhur completely neglects to shed any light on Mahi’s past.

Heroine drags to an extent when you stop caring for the protagonist. Madhur has tried to squeeze too much into the film, probably every incident that he has ever heard of.

Now before the review gets depressing, let’s talk of the positives. Kareena Kapoor delivers a stellar performance rising way above the mediocre script. She lives the character of Mahi Arora. (spoilers ahead) Watch out for the scene at the brothel, where she goes to study the lives of prostitutes, in an effort get into the skin of her character. The funeral scene in the climax. And also her mental anguish when she releases her own sex tapes and battles guilt. Outstanding performance from one of the best leading ladies of our times. Also she looks at her sexiest best in Manish Malhotra’s costumes. At the age of 32, she is still one of the hottest stars in the industry. Having said that, she exposes as much or a little more than Vidya Balan in ‘The Dirty Picture’. Did her character really demand the constant in-our-face cleavage show?

The others have very little to do – Arjun Rampal is good, Randeep Hooda overacts in one scene when he confronts Kareena, apart from that he’s done well. Sanjay Suri is fine. Ranvir Shorey is brilliant. Govind Namdeo is good. Shahana Goswami has a small role and leaves a mark.

The music is good, Halkat Jawani will be loved by the masses. Camera work (Mahesh Limaye) is excellent. Salim-Sulaiman’s background music is good. The editing

Overall, Heroine is one of the biggest disappointments of 2012. The expectations were high from Madhur  and he fails to deliver this time around. His movies are getting repetitive and stereotypical. Having said that, Kareena Kapoor is the star of Heroine and she certainly deserved a better film to showcase her acting talent. Infact, it’s her performance that makes the film bearable.

Watch if you must for Kareena, otherwise avoidable.

Do post your Heroine reviews below. We’d love to know what you think!