Farah Khan made her debut 10 years ago with Main Hoon Na, which remains her most entertaining film to date. She followed it up with Om Shanti Om and Tees Maar Khan, the former was one of the biggest blockbusters of 2007, the latter, tanked after a good start. This year, she returns with her favourite on-screen hero Shahrukh Khan in a film that blends action, comedy, romance, revenge and patriotism in what promises to be an out-an-out entertainer. Does Farah’s much-awaited film Happy New Year live upto expectations? Read on..

Story: The story of Happy New Year reminds you of quite a few big films in recent times. Dhoom 3, Kick and Bang Bang all had a similar storyline. The film is about Charlie aka Chandramohan Manohar (Shahrukh Khan), who forms a team of weirdos to pull off the biggest robbery in the world. To do so, they have to take part in the World Dance Championship which takes place in Dubai. His partners in crime are ace-puker Nandu Bhide (Abhishek Bachchan), Parsi-stud Tammy (Boman Irani), bar-dancer Mohini (Deepika Padukone), geeky-hacker Rohan (Vivaan Shah) and powerful-but-half-deaf Jag (Sonu Sood). The best part? All of them, except Mohini, are bad dancers. Charlie’s mission is to rob 300-crore worth of diamonds to avenge the death of his father (Anupam Kher). Do they succeed? Watch Happy New Year to find out! 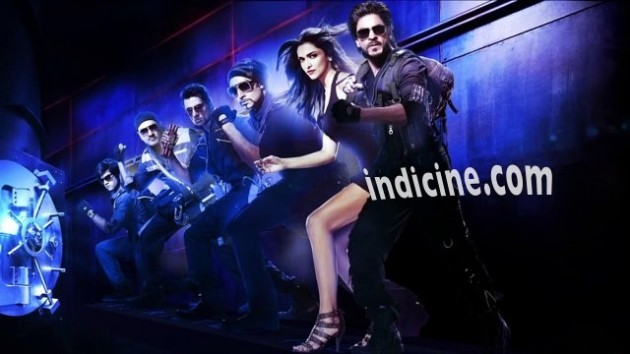 Review: Happy New Year starts off well, the first half is breezy and super entertaining. Farah takes her time introducing all the characters in the film. As expected, Shahrukh Khan gets the best intro, but the intro-scenes of Vivaan Shah and Boman Irani are hilarious. Deepika makes an entry more than 50 minutes into the film with the ‘Lovely’ song. The scenes in between where the 4 male characters learn dancing will have you in splits.

As the film progresses, the pace dips, especially the first 30 minutes of the second half. At first, the patriotic angle will seem like it was forced into the narrative, but towards the end of the film you do feel proud to be an Indian. A few scenes in the film do make you cringe – SRK’s action scene with the Korean, saving the child during the dance competition and all the melodrama in the climax – could have been toned down a wee bit.

You can’t except to find sense or logic in a film like Happy New Year, but it does have a solid revenge storyline, which is narrated in a way that will entertain the audience for its entire length of 3 hours. Happy New Year has very few romantic scenes, and those are very subtly done.

Watch out for these scenes in the film:

Happy New Year is not without its share of downsides. With a runtime of exactly 3 hours, the film does feel long. Ideally, the second half should have been much shorter. The dialogues tend to get vulgar at times – ‘Main zindagi bhar nahi letunga’ (I’ll never get laid in my life), ‘You’re simply breast-taking’, ‘Madar… chod na yaar’, ‘Babaji ka thullu’ (which was changed from Babaji Ka Ghanta by the censor board) just to name a few.  The music was hugely disappointing, as an audience you expect better from a Farah – SRK film. Only one song stands out – Manwa Laage. Choreography is average. Cinematography and production design outstanding!

Performances are top-notch. Khan is king isn’t he? SRK is one of those actors who makes a huge impact with his dialogue delivery, eyes and expressions. He does the same in Happy New Year. He also has his newly acquired 8-pack physique, which he flashes quite often in the film. A toned body also means a lean look, which doesn’t suit him in those action scenes, mainly because his face takes a beating. Deepika Padukone looks beautiful and acts well. She modulates her voice brilliantly, something that she also did terrifically well in Chennai Express. Boman Irani entertains like he always does. Sonu Sood is very good. But the star of the show is none other than Abhishek Bachchan. As Nandu Bhide he shines, in fact he outshines SRK in a couple of scenes, something that not many actors manage to do. Under-rated actor. Jackie Shroff has very little to do.

Overall, Happy New Year is a fun watch. It requires you to leave your brains back at home and enjoy what Farah throws at your in those 180 minutes in theatre. It has a bit of everything that you expect from a typical Bollywood entertainer and probably a little more. The music should have better a lot better and the runtime a little shorter, but Nandu Bhide more than makes up for it!

At the box office, Happy New Year has already taken a bumper opening all over. The film should work with every section of the audience and go on to one of the biggest blockbusters of 2014.

What we liked in Happy New Year