Actor-producer John Abraham and his ‘Dishoom’ co-star Varun Dhawan have unveiled the first look of the upcoming action-adventure film. Riding a bike with a sidecar, the two actors, who will be seen as “buddy cops” in the film, are seen on a chase in the first poster.

“Boom. Introducing Kabir and Junaid. Get ready to #Dishoom on July 29th 2016. #dhawanandabraham #buddycops,” Varun, who has an aggressive look in the poster, tweeted.

Riding the bike, John is also focussed on a distant object or person. With more men on bikes behind them, they seem to be on a desert as camels also form an important part of the background. The bike ride will definitely remind the audience of the popular sequence from Amitabh Bachchan and Dharmendra-starrer “Sholay”.

Directed by Varun’s brother Rohit, the story of the film is set in the Middle East and also stars Jacqueline Fernandez and Akshaye Khanna.

Jacqueline, who doesn’t feature in the first poster, shared it nevertheless and said: “Introducing my boys Kabir and Junaid!! Get ready to#DISHOOM on July 29th 2016 #dhawanandabraham #buddycops#letsdishoom,”

The first look has been lauded by many celebrities. Here’s what they said:

Sanjay Gupta: This is what you call a first look! Mind is blown! Well done guys.

Kriti Sanon: What an amazing first look of #Dishoom! Love it @Varun_dvn

Arjun Kapoor: My brothers from another mother Rohit and @Varun_dvn bring you Dishoom releasing this summer 29th July 2016! 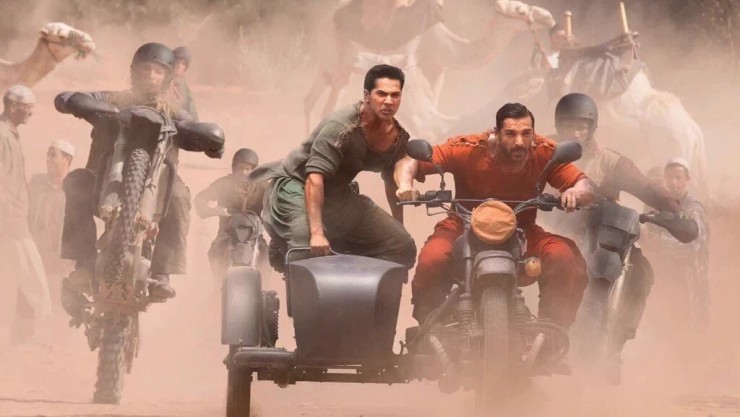