English Vinglish is Sridevi’s comeback film after a 15 year sabbatical. Known for her outstanding performances in films like Chalbaaz, Mr India, Lamhe and many more, Sridevi returns with a film directed by debutante Gauri Shinde, wife of producer R Balki (Paa, Cheeni Kum).

Several popular yesteryear actresses have tried, without much success – Madhuri Dixit failed with Aaja Nachle and Karishma Kapoor returned with one of 2012’s biggest duds Dangerous Ishq. Can Sridevi make a successful comeback?

English Vinglish is about an Indian housewife and her quest to learn English. Shashi (Sridevi) travels to the United States Of America, and finds it extremely difficult to communicate – on the flight, with the airport officials, coffee shops, trains, everywhere. Her husband and children mock her for her inability to understand English. Shashi then decides to join a 4 week English learning course and makes new friends from different cultures and countries. 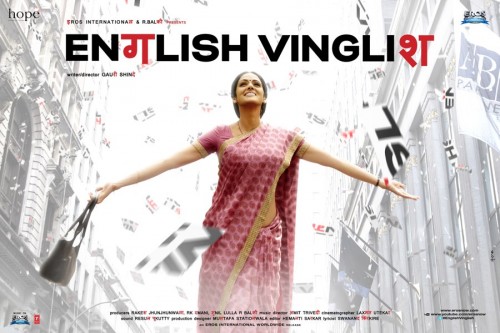 Without getting too preachy, director Gauri Shinde takes you on a journey full of life lessons. Through the course of 2 odd hours, the film teaches you not to be judgemental, respect your spouse, the power of dedication towards a certain goal and eventually the satisfaction of achieving what you set out to. Much like R Balki’s other films, English Vinglish too has comedy, emotions and drama. It’s a story that’s well narrated, with characters that are easy to relate to.

There are several scenes in the film that deserve a mention. The New York cafe scene, where Shashi is humiliated (hard to imagine any other actor pulling off). The entertaining sequences in the English classroom. And finally, Shashi’s speech in the climax, that was received with thunderous applause in the movie hall.

The film is slightly slow pace, especially in the second half where it tends to drag a bit. Music by Amit Trivedi blends beautifully into the film. Laxman Uteker’s cinematography is good.

Moving on to the performances, English Vinglish is Sridevi’s show all the way. Her screen presence, charm and acting skills are intact. Her voice and trembling hands can sometimes be distracting. Adil Hussain, who plays Shashi’s husband, is good. Priya Anand as her niece looks pretty and acts well. Amitabh Bachchan makes a special appearance and leaves a mark. The rest, including the french actor, do well.

Overall, English Vinglish is a fine film with a good story and fabulous performances. A film that can be watched and enjoyed with your entire family. Go for it.