Call it the ‘Aashiqui 2’ effect but all of a sudden, romantic musicals have started sounding much more exciting than ever. With next few weeks witnessing the arrival of as many as four musicals with love story at the core of it, there is massive all around anticipation to check out what indeed is in the offering. After all, the year so far has been good, not great, what with only one 100 crore affair (Race 2) and two films (Aashiqui 2, Special 26) managing to cross the 70 crore mark.

Now with Yeh Jawaani Hai Deewani, Raanjhanaa, Lootera and Ramaiya Vastavaiya all set to hit the screens one after another, one waits to see the magic that unfolds on screen. 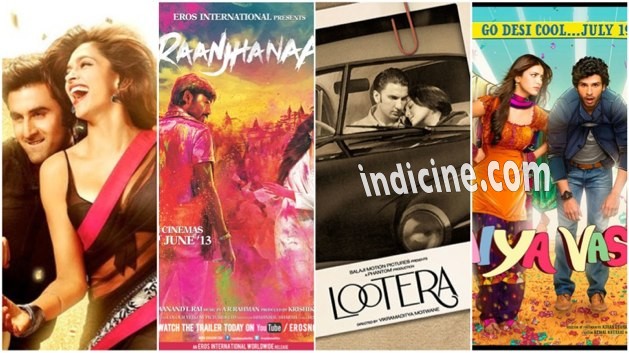 The film was so hot the moment ‘Balam Pichkari’ came on air (and turned into an overnight hit) that it would have embarked on a record start if released a fortnight ago. In fact the challenge that Karan Johar and his team could well have faced was to sustain momentum around the film’s hype. With romance being the central element and Ranbir Kapoor & Deepika Padukone exchanging those sweet nothings as if it was a home video of the times when they were really in love, the film is ultra hot. With Pritam belting half a dozen songs that have it in them to play on a long run as well, the film is all set to enjoy a winning start.

This one indeed threw a pleasant surprise. Yes, this came from the director (Aanand L Rai) who has ‘Tanu Weds Manu’ to his credit. Yes, the film has promised to mark the reinvention of Sonam Kapoor. Yes, it has Dhanush in the lead who turned into an overnight nationwide celebrity last year, courtesy ‘Kolaveri De’. Still, there weren’t many bets being placed to begin with. However, with its First Look evidencing millions of hits in record time, it is now a given that this ‘real romantic’ tale is being looked forward to. To add to this, A.R. Rahman’s ‘Tum Tak’ is a hit already and many more tuneful numbers are all set to be on the way.

This is one romantic tale that has subtlety as its middle name. It found a subtle start for it many months ago when the first teaser was unveiled. It found some subtle tid-bits being thrown around when it came to it’s treatment by director Vikramaditya Motwane. Not just that as even the dialogues mouthed by Ranveer Singh and Sonakshi Sinha have as subtle a flavour as one can expect from this period tale. Now with Amit Trivedi’s ‘Sawar Loon’ bearing a subtle touch too, one can well expect the makers to allow this musical romantic tale to speak for itself instead of an overtly aggressive marketing push doing the talking.

One romantic musical which is actually bracing itself for some aggressive marketing and promotional push is Ramaiya Vastavaiya. For producer Kumar Taurani, this is an ambitious film no less, considering the fact that his son Girish is being launched and that too in a Prabhudheva affair. As is the case with most newcomers, this one too has romance as the central element with music playing a vital role in the proceedings. To do the job, Tauranis have roped current hot-n-happening Sachin-Jigar to do the job and the youngsters have obliged as well. With ‘Jeene Laga Hoon’ doing the trick already, expect more to follow.