Considering the number of movies Bollywood churns out every year, it is an uphill task to select 5 best performances of one particular year. But hold your breath; here we are with the list of 5 Best male leading performances in the last 10 years (2003-2012).

It is possible that many of you would not appreciate the exclusion of today’s most popular superstars, but the fact is, we have compiled the list giving equal weight-age to two most important factors – the magnitude of acting skills as a particular character and the commercial acceptance of the movie.

It goes without saying that 3 Idiots, Om Shanti Om, Dabangg, Krrish, Dhoom 2 and Ghajini are amongst the most successful movies in the last 10 years with rock solid performances by the leading male stars. Also there have been some path breaking and critically acclaimed performances like Guzarish, Swades, A Wednesday, Paa, My Name is Khan, Tere Naam, Guru and Jodha Akbar. But the performances which have surpassed all these and emerged as the Top 5 Best Male performances of Bollywood in the last decade are:

Chak De! India (2007, Shah Rukh Khan as Kabir Khan): Directed by Shimit Amin and produced by Yash Raj Films, Chak De is the story of captain Kabir Khan who is accused of deliberately losing a game of hockey to Pakistan, which controversially ends his promising career. Hidden behind a scruffy beard, SRK delivers his most intense performance ever. Out of all the different characters that Shahrukh has portrayed on-screen, Kabir Khan is arguably his most realistic. He is a man that you could possibly meet in real life, and Shahrukh’s performance in the film reflects this. Along with Swades, it’s one of those rare films where SRK the superstar gave way to SRK the actor.

Koi Mil Gaya (2003, Hrithik Roshan as Rohit): Who would have thought that an actor who looks like a Greek God could successfully play a mentally challenged adult? That too at the absolute lowest point of his career? KMG, without doubt one of the best sci-fi movies to come out of Bollywood, is roughly along the same lines as Hollywood classic E.T. But it was Hrithik’s outstanding performance that provided the knockout punch as the film went on to be the year’s highest grosser. KMG’s success converted it to a successful franchise as it has now spawned into 2 sequels (Krrish and Krrish 3). 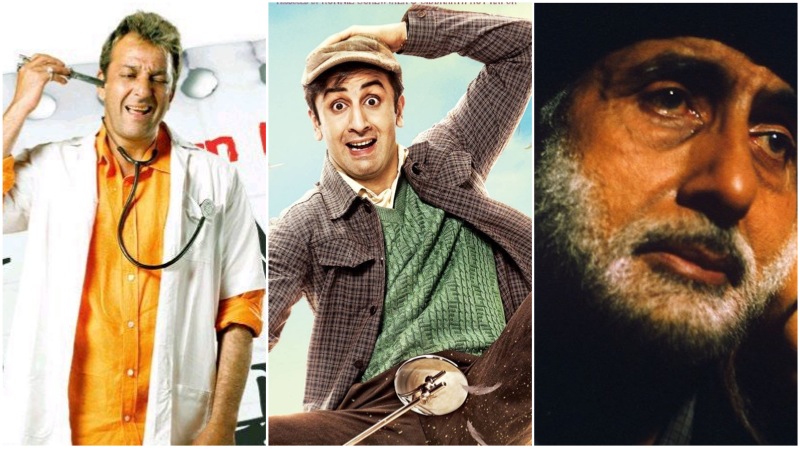 Munnabhai MBBS (2003, Sanjay Dutt as Munna Bhai): Easy! Sanjay Dutt will forever be remembered for his epic portrayal of Munna, one of the most loved characters in Bollywood history. Such is the sheer impact of his performance, that it’s hard to imagine anyone else playing the iconic role of Munnabhai. Dutt excelled in comedy, emotion, action, romance in both the films including the second part in the series – Lage Raho Munnabhai.

Barfi! (2012, Ranbir Kapoor as Barfi): Playing a deaf and mute character, Ranbir proved once again why his climb to the top was just a matter of time. The actor successfully managed to convey a diversity of moods without uttering a single word. His act was heart-touching and shattered the myth that people with disability have a gloomy and grief stricken life. After Rockstar in 2011, Ranbir won his second back-to-back Filmfare Best Actor award.

Black (2005, Amitabh Bachchan as Debraj Sahai): After ruling the 80s and 90s with memorable performances, Amitabh Bachchan makes it to this list too. This speaks of his greatness as an actor, who is competing with actors half his age. In this Sanjay Leela Bhansali’s classic, the character of Debraj Sahai demanded eccentricity and he delivered. Bachchan’s portrayal of a stubborn teacher complimented the character of Rani perfectely and proved to be a pillar of support for her. The gradual dominance of Alzheimer’s disease is most natural and the scenes in which Debraj is taken over by the disease show the real talent within Big B. To be honest, we are short of superlatives for this great man. It’s an enriching experience to watch him perform with utmost dedication.

That’s our list, do post your views on the Best male leading performances of the last decade in the comments section below.