Aditya Chopra. Probably the most famous man in India who cannot be identified by majority of the population. He has directed three movies so far and all of them have starred Shah Rukh Khan, and yes, all of them have been huge blockbusters. So were they such big hits because of Aditya? Befikre will provide the answers. The trailers and promos of Befikre make it seem like a bold, funny rom-com which is targeted at the urban youth. But does it have an emotional core too? No better time to find out than now.

Story: Befikre is a story that celebrates being carefree in love. A quintessential Delhi boy Dharam (Ranveer Singh) comes to Paris for work and in search of an adventure. Just when he was about to embark on this journey of his life he bumps into a wild, free spirited, French born Indian girl Shyra (Vaani Kapoor). A feisty romance ensues between the two in which both of their personalities- one being an equal match for the other are tested to the limit. Battling their ups and downs, both realize that love is a leap of faith that can only be taken by those who dare to love.

Screenplay and Direction: Befikre doesn’t rely heavily on a story and on twists and turns. Befikre flows very fluidly from one half to another without losing any momentum inspite of the story being almost non-existent. The lead characters are spunky even with their idiocy when it comes to taking the important decisions. This is when the title of the movie makes sense. Befikre isn’t supposed to be a morally uptight movie, it just aims to give us a story of two people in a very entertaining manner. Aditya Chopra spins the first half of Befikre craftily with almost no dull parts, but the second half lands in a Paris of predictability and clichés. But we don’t mind that too much. Why? Because the aim was never to give us a meaningful tale of love. 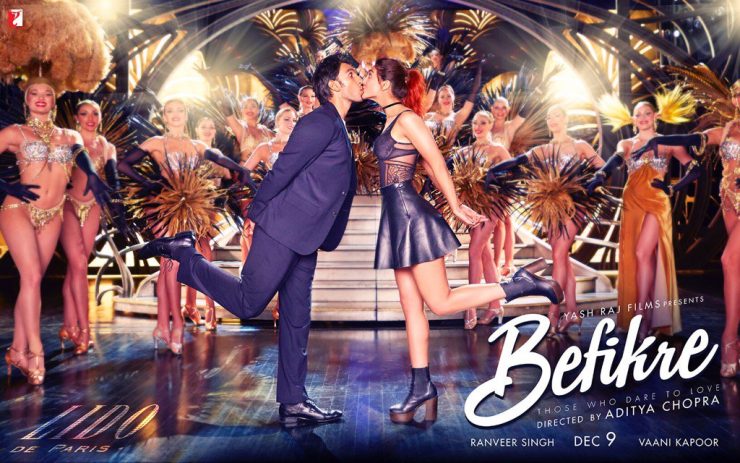 Befikre has an almost 100% French crew and the way the film has been shot can rival any rom-com in the world. Paris has been shot gleefully with a lot of love by the cinematographer. The production design and costume design are top notch. Editor Namrata Rao has managed to keep the film to a respectable duration. The music of Befikre gets the mood of a Punjabi couple in Paris just right. Songs like Nashe Si Chadh Gayi and Ude Dil Befikre give Befikre a jolly musical attire. The opening credits song Labon ka Karobar sets the mood for the film.

Acting: Ranveer Singh navigates Befikre with an assured élan and poise. He deals with a mysognistic and homophobic character with such outlandishness that he makes it work without a sweat. He is fun personified and doesn’t let go of his charm even in the emotional scenes. He is not Shah Rukh Khan, but he doesn’t even need to be one. Vaani Kapoor gives a defiant performance which reeks of confidence and a deft understanding of her character. She never goes overboard with her expressions and manages to impress. The two of them make the film a swift Parisian cruise.

Conclusion: Befikre is the boldest movie Aditya Chopra has ever made, and even in his boldness he has made sure to not let go of his Punjabiness. The characters he has created are carefree and impulsive, and the urban youth will identify with these characters. Befikre starts off really really well with one of the breeziest first halves we have seen this year, and isn’t able to hit those highs in the second half and falls into a trap of clichés. But Befikre deserves to be watched. Why? For the chemistry of the lead couple and for the director who has tried his level best to try something new even at the cost of coming across as brash.