The advance booking of Bang Bang opened last weekend and the response, as expected, has been phenomenal. In Mumbai, the advance booking is comparable to films like Kick and Chennai Express, but lower than Dhoom 3. In the North, tickets sold in advance is significantly higher than Hrithik’s last release Krrish 3 which was affected by the pre-Diwali period and comparable to big releases.

At smaller centres and single screens, tickets have been selling at a brisk pace too – as good as any big release release in recent times. About 10-20% theatres started selling tickets yesterday and quite a few theatres are yet to begin ticket sales.

City-wise Advance booking, the detailed report after the image: 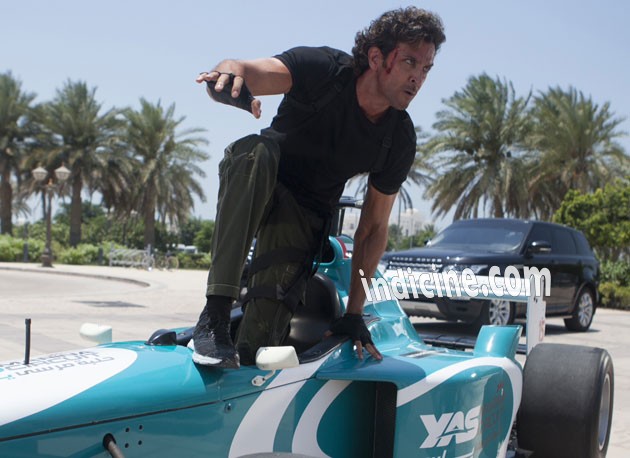 Advance booking as fast-paced as some of the action sequences!

2. Bangalore – Like Mumbai, Bang Bang also gets a huge release in Bangalore. The buzz in the city is high and most Hrithik films tend to open very well in the Mysore circuit. Advance booking is very good and tickets might be hard to find for those who decide to wait until tomorrow to buy tickets at the theatre. Again, the shows here is about 2x more than Haider. Also in Bangalore, premium tickets priced between 700 – 900 (including meals and refreshments) have been selling well.

3. Hyderabad – Incredible response in the city of Hyderabad, probably the best ever for a Hindi film release here. Tickets are selling like hot cakes. All shows are likely to run at 100% for the entire day here on Thursday.

4.  Mangalore – Advance booking is yet to open in one of the three multiplexes here. A single screen will also be showing Bang Bang. Advance booking isn’t great, but most shows are likely to run at full occupancy tomorrow.

5. Kolkata – The advance booking in theatres at prime localities have been selling well, others are yet to pick up. Again, number of shows are twice more than Haider, which is something that was expected.

7. Chennai – A city that loves Hrithik Roshan. Almost all his films after Koi Mil Gaya have opened well here. Bang Bang should be no exception. Advance booking hasn’t yet opened at many theatres, which is probably because of the jailing of the Chief Minister of the state Jayalalitha. Theatres remained shut on Tuesday and now that she hasn’t been granted bail, it remains to be seen if theatres will show films on Thursday. If they don’t, the opening day collections of Bang Bang will be affected.

8. Patna – Outstanding response here. All shows will be sold out on Thursday.

9. Chandigarh – At a city that doesn’t believe in booking tickets in advance, Bang Bang has managed to sell a few tickets. The response is much like most other biggies, but lower than Dhoom 3.

10. Ahmedabad – Plenty of tickets are currently available. However, Bang Bang is expected to fetch a good start here.

So far so good for Bang Bang. More than 10 crore worth of tickets have already been sold as of Tuesday. Today will increase that number further.